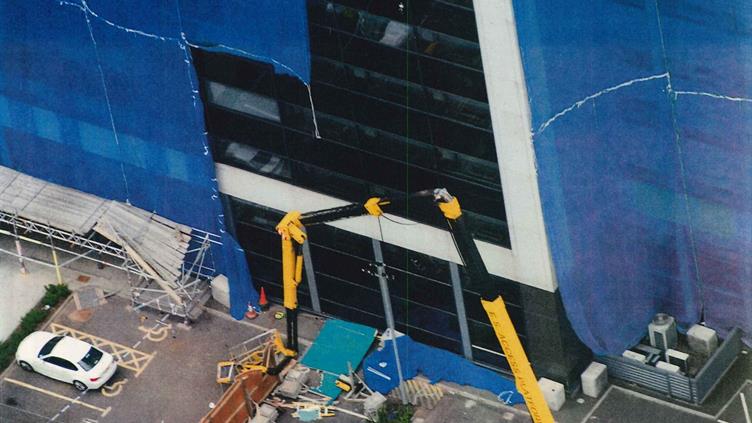 Airdrie Sheriff Court heard that Gary Currie and Alexander Nisbet were working in the basket of a mobile elevating work platform (MEWP), a cherry picker, at a height of about 30 m when the collapse happened on 20 June 2012 at Buchanan House, an office block in Port Dundas Road, in Glasgow. Currie was removing netting from the building's facade and Nisbet was operating the platform.

The Health and Safety Executive (HSE) investigation found that the third main boom section of the MEWP (known as main boom 3) had buckled, crashing the basket to the ground, killing Currie and seriously injuring his colleague.

The court heard that the cherry picker was owned by Craig Services and that the person, who to all intents and purposes was the company's manager, was Donald Craig.

J M Access Solutions was fined £30,000 for its failure to carry out a thorough examination of the platform and its safety-critical parts.

The court heard there had been an earlier incident in Penicuik on 17 May 2011 when the cherry picker's boom buckled while it was in use. Fortunately, on that occasion, the boom's fall was halted by the roof of a block of flats.

The court heard that the failure of main boom 3 was never fully investigated following the incident. CTE Spa, the cherry picker's manufacturer's representative, advised Craig Services to replace at least main boom 3 but the company chose instead to repair it, which was relayed to CTE Spa by email on 10 February 2012. Sheriff Collins said that Craig Services did not have any manufacturer's approval nor a manufacturer's specification in relation to the proposed repair.

Such was the damage to main boom 3, it was clear that both a major repair and an extensive modification was needed, the court heard. However, the company's manager had instructed a firm of welders to carry out the repairs, stating that the main boom 3 would be nested inside the second section of the boom. As repairs proceeded, Craig assured the welder that the platform would only be used as a short-reach machine and would not be load-bearing. At no time did Craig Services carry out a modification to the cherry picker to ensure main boom 3 did not bear loads.

HSE principal inspector Graeme McMinn said: "At the time of the accident, the MEWP had a catalogue of defects some of which were safety critical demonstrating that Craig Services did not have an adequate proactive maintenance and reactive repair system in place within the company."

He added: "The competence and diligence of a thorough examiner is vital as it is they who declare the MEWP safe to use. J M Access Solutions failed to carry out a diligent thorough examination and declared the MEWP safe to use. The British Standard provides guidance on what an examination should include following a major repair on a MEWP structure. Non-destructive testing and load testing should have been carried out and overload testing discussed with the manufacturer."