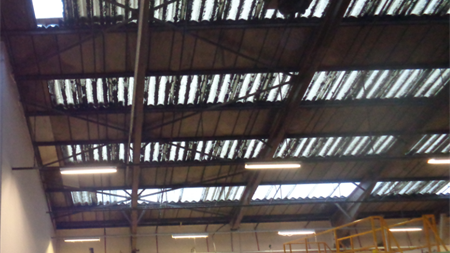 Principal contractor Weiser Construction had subcontracted Complete Cladding Systems to carry out roof repairs on a factory building in Mirfield, West Yorkshire.
On 4 January 2016, roof sheeter Brian Robinson was fixing sheet metal cladding and capping to the gable end of an adjoining building. As he was tying the cappings to the roof, he fell to the factory floor below.
Robinson sustained several fractures and underwent six operations to repair his leg and pelvis.
His legs struck a 2.4 m tall storage cage when he fell, the Health and Safety Executive (HSE) said.
Its investigation found the original scaffolding that had been erected on the roof was removed before the cladding works were complete.
A Spandeck walkway with guardrails was the preferred control measure, the HSE said, but use of these boards meant workers could not fix the handrails in situ.
In addition, no safety nets were used on site.
Weiser Construction, which has gone into liquidation, and Complete Cladding Systems pleaded guilty to breaching s 3(1) of the Health and Safety at Work Act and have been fined £145,000 and £165,000 respectively. They both must pay costs exceeding £5,000.
HSE inspector Paul Thompson said: "Work at height, such as roof work, is a high-risk activity that accounts for a high proportion of workplace serious injuries and fatalities.
"This was a wholly avoidably incident, caused by the failure of the principal contractor to manage and monitor the works to ensure the correct work equipment was being used. This risk was further amplified by the cladding company's failure to ensure suitable measures were in place to prevent persons falling a distance liable to cause personal injury."
Topics
Personal protective equipment
Work at height
Construction
News