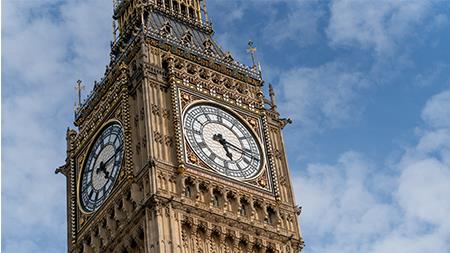 The House of Commons commission approved the restoration plans, which involve extensive repairs to the entire clock tower -- officially known as the Elizabeth Tower -- as well as the dismantling and restoration of the tower's clock, including its great bell, commonly known as Big Ben.

However, after the announcement on Monday that Big Ben would stop chiming from next week for four years, some members of parliament complained about excessive "health and safety".

One of the reasons given for the decision to silence Big Ben was to protect the hearing of workers who are undertaking the restoration.

The TUC released a statement that protecting workers' hearing was far from "health and safety gone mad. It's just plain common sense".

He said: "The clock tower and clock are being subjected to the largest restoration work ever attempted in their history, with the entire mechanism being dismantled piece-by-piece and each cog restored for the first time since it was built. Also, the four clock dials will be cleaned and repaired, the cast-iron framework repaired, all the masonry renovated, a lift is being installed and there is a range of other conservation works."

As part of this process, he added, the bells will be disconnected and the weights lowered to the bottom of the shaft. "The idea of keeping the bells ringing, or even ringing them once a day is a non-starter," he said.

Employers must provide hearing protection at 85 decibels and the bells in the clock tower ring at 118 decibels. Robertson said this was "over eight times the level that is considered dangerous for hearing and much the same as standing next to a jet plane at ramp".

He argued that ear protectors were not an option because workers would not be able to communicate or hear alarms. Robertson added that because the peals are every 15 minutes, the likelihood is that "the workers would take the protectors off in between and forget to put them on in time."

The Health and Safety Executive (HSE) also issued a statement defending the decision. A spokesperson said: "People's health should not be made worse by the work they do, so it is important that no worker should suffer any hearing loss while working on this project."

The HSE said that it has liaised with both the client and the principal contractor on the project. "We've noted how intricate, complex and challenging this particular exercise will be. Health and safety aside, we understand these challenges would have silenced Big Ben's chimes for at least two years anyway," a spokesperson added.

"While we were aware part of the project related to the clock, we have not been involved in discussions about how that work will be specifically carried out.

"There is broad agreement that the noise risks associated with working around the clock bells are highly significant and we would expect the principal contractor to manage those risks. How it does so is a matter for those involved and their client."