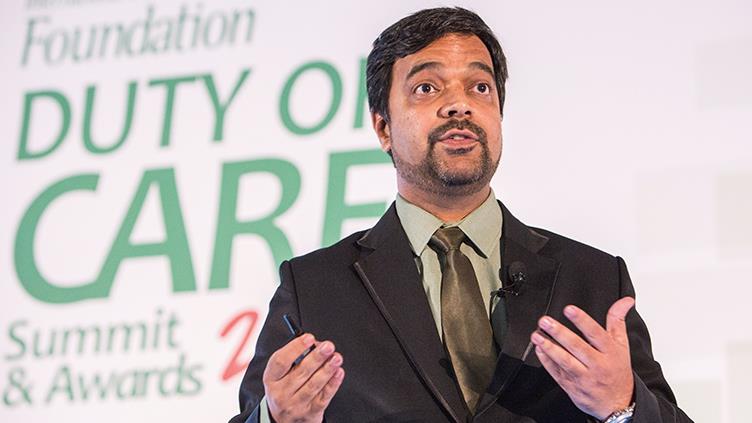 "Ten percent of our 850 staff have disabilities and the majority of them travel," Tom van Herwijnen told the audience at the International SOS Foundation's first Duty of Care Summit, "which can be quite a challenge."

Van Herwijnen is health, safety and security manager at CBM, a charity that provides healthcare to some of the estimated 10 million people with disabilities in the world's conflict zones and developing countries. So the challenge posed by protecting staff with hearing, visual or mobility impairments in countries such as South Sudan and Afghanistan is understandable.

As a measure of the risks involved he offered the example of a deaf worker at one of the food distribution centres in a war zone, "which are attractive targets for rebel groups". Say a group of armed guerillas enters the centre, shoots in the air and orders everyone to stop what they are doing. "If you don't hear them you won't stop," he said, noting that a hearing-impaired worker had been shot in such circumstances. 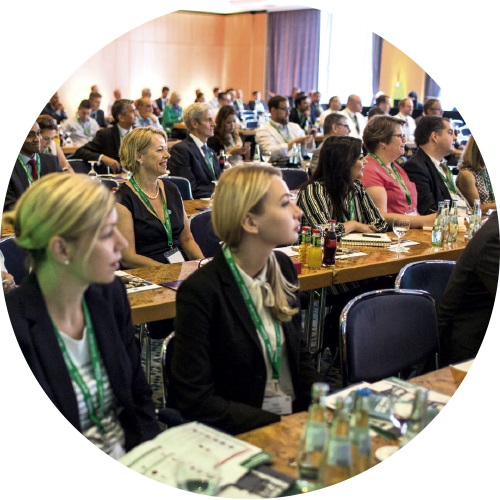 CBM ensures that its workers with disabilities are partnered with other staff who will watch out for them in a crisis, extending to full-time personal assistants for those who need them.

Employees with and without disabilities receive extensive joint safety training, practising scenarios such as trouble at checkpoints and evacuation from spaces filled with debris.

"We have to look at the reality, what people are able to do and what help they need," said van Herwijnen. "I was teaching a blind person to do CPR [cardio-pulmonary resuscitation] recently, guiding his hands.

"We teach the basics of self-defence because when there is no alternative they need to be able to fight themselves out of a situation."

CBM tries to plan ahead for eventualities that could make travel difficult for mobility-impaired staff, such as wheelchairs being lost or damaged in transit.

Van Herwijnen said the organisation would only block the posting of an employee with a disability in exceptionally risky circumstances. He noted that CBM publishes on the web its guidance for employees with disabilities travelling for business (bit.ly/2thOJzh).

"We have an extremely motivated group and a low staff turnover rate," he concluded.

The summit, held in Berlin on 29 June, covered protection for business travellers to all destinations, not just the most hazardous parts of the world.

Setting the context at the beginning of the day, the International SOS Foundation's executive director, Laurent Fourier, noted that travel risks were exacerbated by increases both in mobility -- air passenger numbers are expected to double to eight billion in the next 20 years -- and in the risk levels at what previously were thought of as safe destinations. Fourier noted that terrorist attacks in the West now average one a week. He said businesses operate in an environment which can be summed up by the acronym VUCA: volatile, uncertain, complex and ambiguous.

No employee is excited to receive a monthly travel security newsletter

Dr Walter Eichendorf, president of the German road safety council and the state accident insurance agency DGUV, noted that beyond the moral necessity of protecting workers abroad there was a compliance element. Now more than 50 countries require employers to have risk assessments that apply to business travel as much as any other work activity carried out by their staff.

Michelle Berners Price, KPMG's senior manager of global mobility services, noted that at company level, acceptance of tracking technology was subject to a generational shift. "The younger generation is used to having location services on in the apps they run so they are less concerned about being tracked," she said.

Thomas Wolf, partner, immigration and employment law, KPMG Germany, said the best advice to anyone trying to manage the safety of business travellers was to gather as much data as possible. "Know your traveller population in detail. Know who is going where and what they are doing."

Berners Price added the caveat that she sometimes saw "perfection paralysis" in which organisations delayed action while they were trying to form a complete picture. "Work with the data you have and look at the risks it shows," she advised.

The conference featured presentations by winners of last year's inaugural Duty of Care Awards. They included Dr Ashish Mishra, health director at Dow Chemical, who explained the measures the company had taken to ensure the health, safety, security and peace of mind of 1,500 staff who moved in 2012 to Saudi Arabia, specifically to Jubail Industrial City No 2. The workers and their families represented 30 nationalities and were relocated to help to build and commission a manufacturing plant as part of a joint venture with Saudi Arabian Oil Company.

A harsh climate (summer temperatures rise to 54°C) and disease risks such as Ebola and Middle East respiratory syndrome -- "that comes from camels and it's hard to get rid of camels in Saudi Arabia", said Mishra -- necessitated thorough risk assessments for the secondees, some of whom had little travel experience. 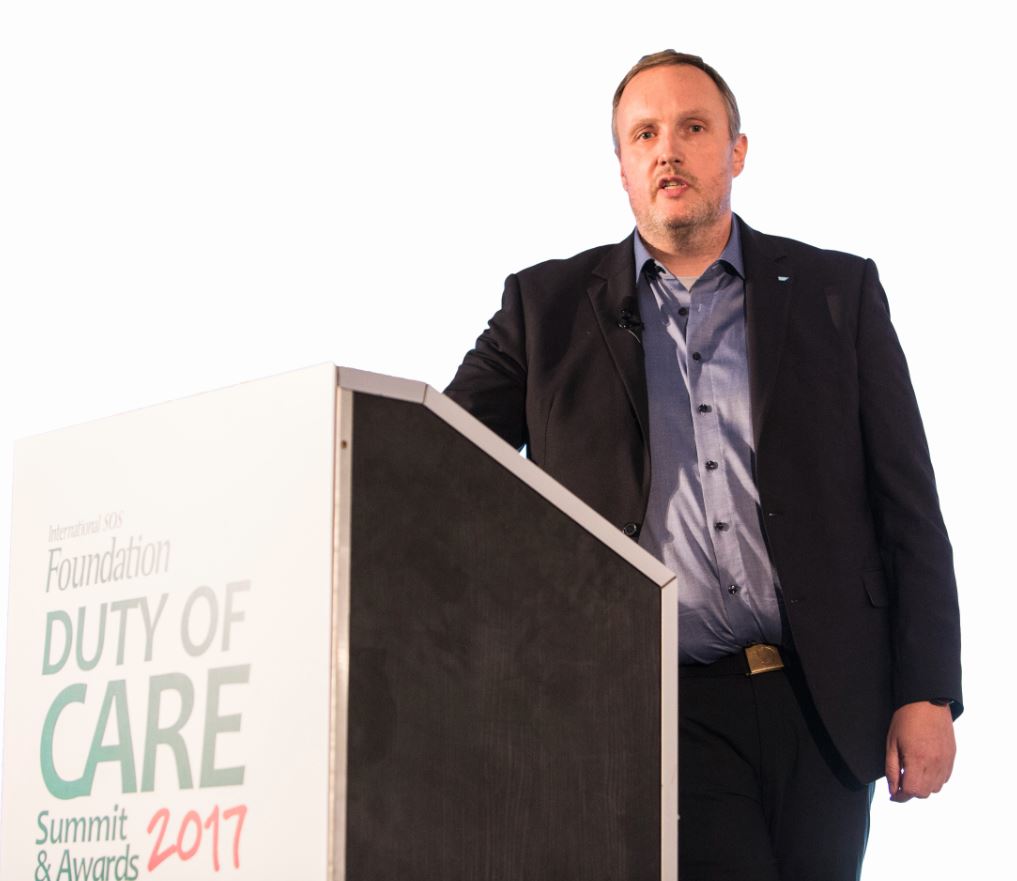 A cross-functional "SWAT team" of human resources, OSH and security staff was formed to ensure continuing support to the group throughout their placements and a 24-hour telephone concierge service provided emergency help.

Dow carried out security vulnerability assessments of the living compounds, schools, hotels and shopping malls the employees would use and then held regular inspections, emergency training and drills at the compounds.

Driving in Saudi Arabia was identified as one of the most hazardous activities and all the expats were provided with chauffeured cars, whose drivers were trained in defensive driving. The vehicles were fitted with speed regulators, panic buttons and location trackers. Employees would receive alerts asking them to turn back if they strayed into areas that had been identified as high-risk for expatriates.

"The incident rate was pretty low, whether it was health or security," said Mishra. The number of people extending their postings to the plant was high and there were "many ambassadors going back with positive messages about working in Saudi Arabia".

Mathias Braje, head of corporate continuity at business software company SAP, advised delegates to "sell" their travel safety messages to staff in the same way as any other product and not to take their interest for granted.

"No employee is excited to receive a monthly travel security newsletter," he cautioned.

In engaging SAP's 85,000 employees who make 250,000 business trips a year in total, Braje said timing was all-important. After a major incident, there is a three-day window when employees will be particularly receptive to advice. "You have to be ready," he said.

After the attempted coup in Turkey by an army faction in July 2016 was followed the next day by an attack in Nice, France, when a lorry was driven into a holiday crowd, an email from SAP's chief executive boosted the download rate of the company's traveller safety app by 50%.

Braje advised delegates to "use the unusual channels" in promoting travel advice and resources.

He had spent just €400 on printing 10,000 stickers bearing the number of the company's emergency hotline for travellers and made sure they were distributed at points where employees would be more likely to pick them up, such as when the badges were given out for SAP's Christmas parties.

Asked whether the company had made installation of the app and other forms of support mandatory, Braje said: "We have considered it but we aren't going in that direction. SAP has a very agile business culture. Employees can travel where they want." The company would offer special support to individuals going to high risk destinations, he said, "but we are not tackling travel safety and security from a compliance perspective".