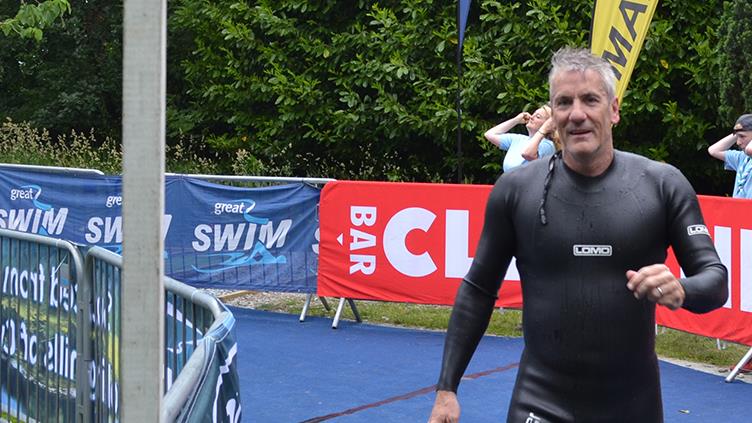 Before I tried it, I wasn't aware just how different it is swimming outside compared with in a pool: you can't just swim -- you have to acclimatise or you can get cold-water shock. What I didn't know was that your rib cage expands when you wear a wet suit in the water. It's a natural physical reaction but it makes the suit feel really tight.

The first time I swam outside, I got in the water and I didn't like it. I'd forgotten my cap and I got terrible neuralgia. I felt awful, and when I got out I said I wasn't going to do it again. But my wife encouraged me to give it another try, and the next time it was fine. After a few minutes in the water, I didn't find the wet suit uncomfortable; you get used to it quickly.

There is a risk: every year someone dies at the event

When you're swimming in a pool, you can see the tiles on the bottom and swim in a straight line. Outdoors, you have to change your strokes so that you can look forward to see where you're going and keep your bearings -- by focusing on a buoy, for example. It's not for everyone -- my wife dreads the thought of swimming in deep water -- but for me it's exciting. It's not relaxing like swimming in a pool; it's more of an adrenaline rush. When I go in, there's always a slight trepidation, but afterwards it's a great feeling. 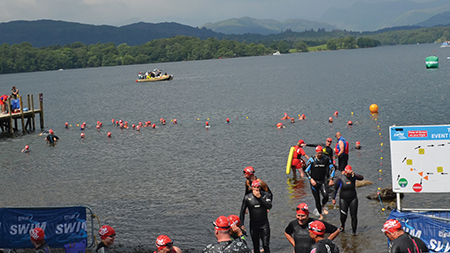 I live on Merseyside, close to Eccleston Mere, where I train every Monday evening with a group of triathletes. I swim all year in the pool but the open-water swimming season is short: it runs from around the end of May, depending on the temperature, to roughly the end of September. Outside these months you risk cold-water shock, even in a full wet suit. At the beginning of the season the water temperature is around 20°C.

I set my own targets. Initially I found it difficult to swim a mile, but when that became easy I changed the target. I bought a waterproof stopwatch and now it's time that's the master, rather than distance. I'm trying to get my time down from 27 and a half minutes. Fitness helps, but you have to acclimatise to the environment. For example, there can be waves, even in a lake or a mere. Also, when I swim in the pool I breathe to the right, but when you're swimming outside you have to breathe on both sides; it's called bilateral breathing.

It's amazing how many people do outdoor swimming, and you don't necessarily have to be a strong swimmer. It's great meeting likeminded people who enjoy it as I do.

My most memorable experience was doing the Great North Swim last year: 10,000 people swim in a series of races over three days. There were around 300 people in my race and I finished highest in my age group, which was a small victory. Unfortunately it was dreadful weather so my wife, who came to watch, was soaked. But the atmosphere was amazing: so uplifting. As soon as I finished, I said: "I'm definitely doing that again next year!"

There is risk: every year someone dies at the event. With each race there are several hundred people in the water and five or six chaperones. I tend to stick close to the kayak and the people who are there to look after you. I check my kit carefully and I make sure I'm healthy enough to do the swim. So I do assess the risk. You need around six months' training for an event. It's about knowing the risks and doing all you can to mitigate them.

I'd definitely recommend anyone to try it if they're fit enough. Swimming is a great sport. I'm an ex-footballer and when I played I was always picking up different injuries; you get to a particular age and it becomes difficult. But I've never had any injuries from swimming. Even when I don't feel like going, as soon as I get in the water I'm glad I did. And it's a great feeling when you've finished a swim, even in the pool. My next challenge is to try a triathlon.