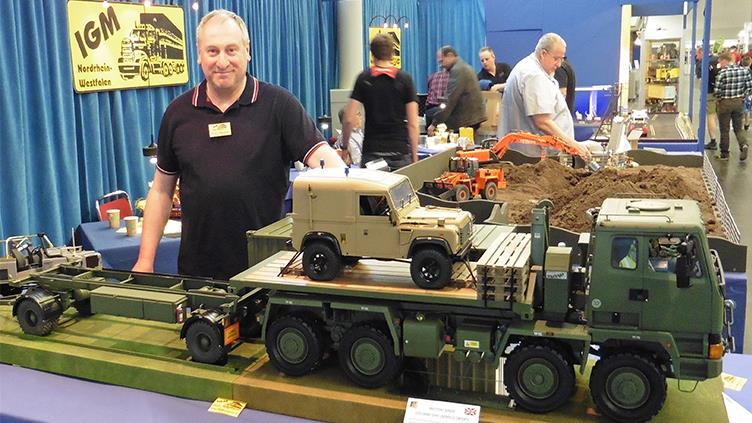 Even as a youngster I was into radio-controlled vehicles. I come from a family of engineers, and I've always been a builder. I was the child that liked to take things apart to see how they worked. Earlier in my career, I spent many years as a specialist vehicle body builder, constructing vehicles for the military, Middle Eastern royalty and Formula One racing.

Around 30 years ago, I started to build and display large, 1:8 scale radio-controlled vehicles, mostly from scratch materials, drawings and pictures. The first one I made -- in about 1985 -- was a forward-control model Land Rover; I've always been interested in Land Rovers and, as a squadron commander, I drove lots of them. I made it out of tin plate. The pieces of tin were "blanks" that would have been rolled into food cans.

With my engineering background, I like the challenge of building from scratch and making a model as close as possible to the original. I love getting in all of the detail. It can be hard to feel that a model is ever completely finished. A bit like an artist, you think to yourself, "I could just do this, or try to tweak that". I end up making some parts three or four times. 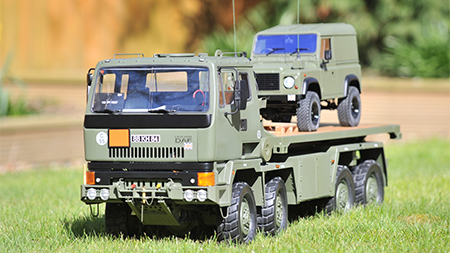 It's very therapeutic when you're working on a model. But sometimes when I have an evening spare and I sit down to work on something, I'll realise I'm not in the right frame of mind. Some of the nuts and bolts are very small -- 1 mm or 2 mm -- and, as you get older, if you're not concentrating properly they tend to fly out of your hand.

I get lots of details from photos. When I first started making models, there was no internet to use for research. Fortunately, a few miles away from where I live near York, there's a specialist Land Rover dealership which has lots of old military kit, so I got involved with them. I would go there to measure things up, and I'd also get in touch with the manufacturers for help -- some were happy to, some wouldn't. Now I have an iPad tablet, and if you search for Land Rovers you get thousands of pictures.

I've made 12 models altogether. I started with Land Rovers, then ventured into doing a radio-controlled tug before returning to military vehicles. I have a small workshop at home, where I'm working on two tracked Bv 206S articulated personnel carriers. I go to Germany a lot: they're really into engineering and their engineering shows and festivals are massive. There is a community in this country, but it's much bigger in Germany; they'll make anything.

I'd get in touch with the manufacturers for help -- some were happy to, some wouldn't

I've displayed my British Army Leyland DAF Truck, trailer and Land Rover models at the Dortmund Intermodellbau and the Friedrichshafen Faszination Modellbau. The truck took me around ten years -- on and off -- to complete. As you can see in the YouTube video (bit.ly/2QA7w3c), it's fully functioning, with radio-controlled working oil hydraulics at 25 bar pressure. It measures 1,100 mm long and weighs about 35 kg, so it's strong and pretty robust -- it has the capacity to pull a small car. It has a sound computer, full lighting and a smoke generator to simulate the engine exhaust when running.

With the truck, one particular challenge I struggled with was how to make the indicator lenses at the front. Then one day I was driving up the motorway and I had a lightbulb moment:

I could make a mould and cast clear resin. The next challenge was that I wanted the effect of the lined pattern on the indicators. I thought about filing the lines in, but then I was rummaging in a spares drawer and I found some old computer cable which I realised I could use inside the mould to make the pattern. It might have got stuck, but fortunately it worked perfectly.

Making models definitely helps with the day job in terms of research, patience and inquisition skills. You learn to not just look for what you can see, but to look at what you can't see immediately. The Health and Safety Executive tells us that, when we risk assess, we should look at what is reasonably foreseeable. There's also a crossover with my military background, in terms of being procedural. Civilian employers are not as rigid as the forces: if in the forces someone shouts "Duck!", you get down -- you don't stop to have a discussion or an argument about it!

I'd recommend anyone to have a go at making models. No one knows everything; it's about persever-ing -- trying something, trying it twice. We live in a throwaway society, so it's good to make things, re-purpose things and repair things.