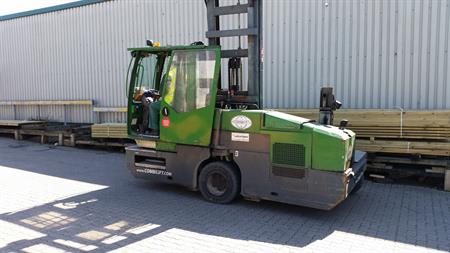 When Gassor arrived at Covers' site on Quarry Lane, the timber on his vehicle was unloaded by a forklift truck operated by a David Cover and Son (Covers) employee. The timber was on top of a series of steel metal posts acting as bearers.

Once the unloading was completed, Gassor got out of his cab and started to stow the metal posts under the lorry. The forklift returned and the driver gave him some papers. Gassor then returned to finish stowing the bearers. As the forklift pulled away, the rear of the vehicle swung out and crushed the lorry driver's hand against a part-stowed metal post.

Gassor was rushed to St Richard's Hospital for emergency treatment and had to have parts of three fingers amputated.

Brighton Magistrates' Court heard this week that Covers had failed to ensure the safety of pedestrians on its site. Evidence was provided of other visiting drivers who had experienced similar incidents of forklift truck drivers driving up to hand them paperwork while they were standing in the yard.

The Chichester firm pleaded guilty to a breach of s 3 of the Health and Safety at Work Act. Chichester District Council said that the company had had a good safety record prior to the incident and had fully co-operated with its investigation. Since the incident, Covers has fully reviewed its safety procedures for forklift truck movements. It was fined £120,000 and ordered to pay costs of more than £6,000 plus a victim surcharge.

Rupert Green, chairman at Covers, said: "We extend our heartfelt sympathies to Mr Gassor and his family for the injury he has suffered as a result of the incident."

He added that since the incident, the company had "carried out a thorough internal investigation and review of all our policies and procedures and implemented additional preventative measures at all our depots. These include ensuring visiting drivers are kept in a holding area at the depot while forklift trucks are in operation and not allowing them to breach this area until the forklift has been safely stopped."