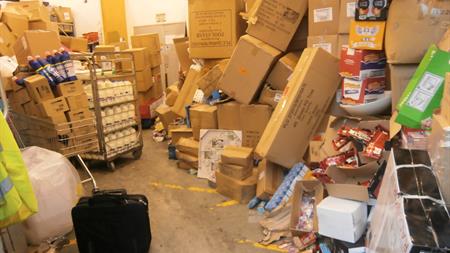 All counts related to the overstocking of goods and a failure to train staff, a spokesperson for Swindon Borough Council, which brought one of the prosecutions, told IOSH Magazine.

The breaches in Swindon were revealed after an unannounced visit to the St Margaret's Park store on 17 November following a complaint from an employee. The environmental health officer (EHO) found the warehouse had been "grossly overstocked" and was in a "chaotic condition".

The local authority charged Poundstretcher with 16 offences under the Health and Safety at Work Act, which included failures to keep aisles and walkways clear of obstruction, blocking fire exits and placing young persons at risk of harm without the necessary training.

Three breaches took place at the company's Newbury Retail Park store in Berkshire, which EHOs visited in December 2014. They found emergency exits had been blocked and excessive stock had been stored dangerously.

Poundstretcher, which has 400 stores and 6,000 staff nationwide, was sentenced on 12 December at Portsmouth Crown Court.

Judge Hetherington said: "To blame the local management is not only deeply unattractive, coming from a major employer [-¦] but quite unfair. This complacent attitude was highlighted by the way in which senior management dealt with requests for interview by enforcing authorities [-¦] Their consistent failure properly to engage with and answer questions spoke volumes as to the company's attitude towards the role of the enforcing authorities."