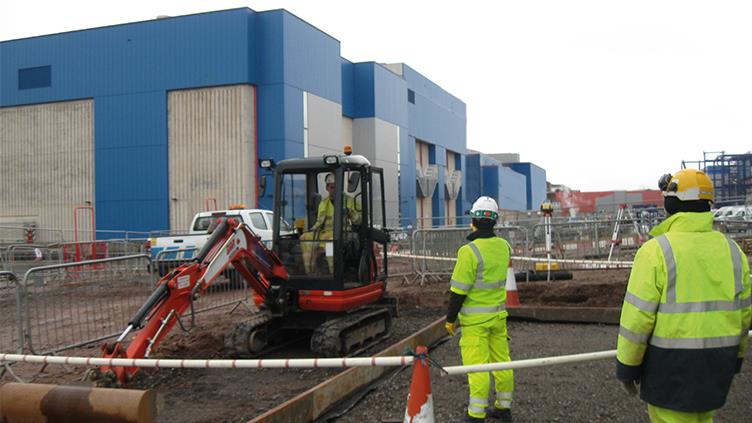 Sellafield's nuclear decommissioning and reprocessing site on the Cumbrian coast is home to one of the largest and most complex construction projects under way in the UK.

The site is undergoing a 100-year-long programme to replace the original treatment and storage facilities, which have deteriorated since construction at the start of the cold war in the late 1940s and 1950s (see our feature in November 2016's IOSH Magazine, bit.ly/2wLvqSN Sellafield, nuclear decommissioning).

The building programme to replace decommissioned and demolished structures on the 6 sq km site comprises more than 500 projects, with a forecast £3bn spend on major infrastructure over the next ten years.

The heavily congested site has provided a test bed for a new segregation model to reduce the risk when construction plant operates close to ground workers. Health and Safety Executive (HSE) statistics show that nationally seven workers are killed in an average year in accidents involving vehicles or mobile plant on construction sites and a further 93 are seriously injured (bit.ly/1yV7KX6).

"The culture of people thinking they are invincible because they know the plant driver and have worked with him for 20 years or that incidents will never happen to them is not acceptable," says Anthony Horton, health, safety and sustainability manager at Carillion. Together with Sellafield's Projects Delivery Directorate (PDD) safety team and seven main PDD contractors and supply partners, Horton was part of the joint effort to develop the model.

"People must be segregated from plant," he says. "If we have no choice but to work close to the plant, we must do so in a very precise, planned and disciplined way."

Horton notes that, though the safety record at Sellafield is impressive, there were nine near-misses involving plant and worker interaction in the construction projects in 18 months recently.

"Rather than waiting for something to happen, we wanted to steer a preventive approach," he says.

The contractors review PDD site incidents with the safety team at weekly peer review meetings. They also share observations of industry standards and comment on incidents flagged in national safety alerts as well as near misses and accidents drawn from their own projects elsewhere in the country. 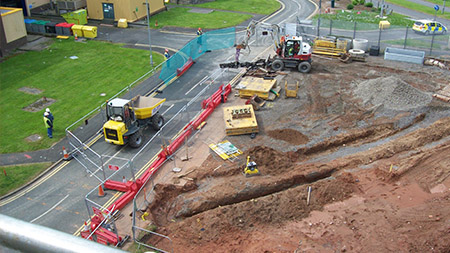 One of the main points for collaboration is that we have a workforce at Sellafield who could be working for Carillion one year and Balfour Beatty the next," Horton says. "In the outside world, our procedures may vary and what we want to make sure of here is that no matter who you are working for, everyone works to the same standards."

On the genesis of the segregation standard, he says: "We had a look around the construction industry and there was nothing bringing together [the HSE's guidance on segregation] into an easily used concept that workers could understand -- what type of segregation to use and when they need to use it."

The model was sketched out by Sellafield's PDD safety team and main contractors in a series of workshops in February 2016, using process mapping techniques. The collaborators first visited the Manchester Smart Motorways project to see how Carillion was managing plant and worker movements on the M60 scheme with its joint venture partners. They were particularly impressed by the training course for site workers but felt it should be adapted to suit a more challenging construction environment.

It's not telling workers to suck eggs. It's providing more discipline in the way they manage close-proximity work

The collaborators' peer review had revealed that poor discipline in segregating workers from moving machinery was a leading cause of injury. For any model to work in a heavily congested construction environment, it had to offer both fixed or permanent segregation and a mobile alternative for situations when workers needed to access an area where vehicles or machinery were operating.

Using the motorway project's training as a foundation, the PDD partners developed a three-level hierarchy, together with a process map, to determine which category work would fall into.

The first level, for low-risk work, ensures complete segregation by installing a range of fixed or permanent barriers, including Armco or Rhino barriers, scaffolding, Herras fencing or J-Safe Guardrails to enforce zero interaction between workers and plant.

The second level, for medium-risk work, was designed to support operatives on a site where work is constantly changing.

"That's one of the biggest challenges you come across with keeping people segregated," says Horton. "We wanted easy-to-move segregation equipment and it needed to be light because we didn't want any manual handling issues."

The trade-off with the provision of greater flexibility is that a pedestrian marshal must be stationed at the perimeter to oversee the access points.

"If workers need to enter the area, they contact the driver," says Horton. "They can only enter once the machinery has been isolated."

The last level, for high-risk work, has been designed to manage situations in which operatives must work near moving plant. Only those needed for the task (close-proximity workers) can enter the segregated area under supervision. There are strict rules governing this most hazardous level of interaction.

"What you'll see a lot in the construction industry is an operative [standing close to where] the machine driver is operating," Horton says. "They'll be standing around trying to look busy or talking to a mate or the machine driver when they have no need to be in the plant's vicinity. They shouldn't be there.

"What we're saying is only when the task has been assessed -- and we have no choice but to put operatives near plant -- and a detailed, disciplined safe working system has been installed can we work close to plant."

For more complex tasks, the level of supervision will be increased, according to how congested the area is and the type of activity.

"It's not telling workers to suck eggs," Horton adds. "It's providing more discipline in the way they manage close-proximity work and making sure what they do is planned precisely. There's also a detailed sequencing that is recorded in the safe system of work."

Before work starts, the PDD partners hold a stakeholder meeting in which the plant operator, the close-proximity workers, the engineers and the site supervisor discuss the task and finalise the level of segregation. From this, a safe system of work is devised and communicated with the operational team.

"They've got the experience and we get them involved as early as possible in the planning of the work," Horton says. "That's to avoid someone turning around and saying, 'We can't do it like that -- we do it like this and it's a better way of working'. It's really tapping into the experience of the workforce."

Ideally, the risks of the more hazardous work would be designed out or avoided altogether, he adds. Such issues are discussed at the stakeholder meetings.

At the start of each day, the site teams hold a pre-job brief during which the supervisor will outline the work and the segregation requirements. The brief also serves to identify where the barriers are, who the close-proximity workers are and the sequence of tasks. 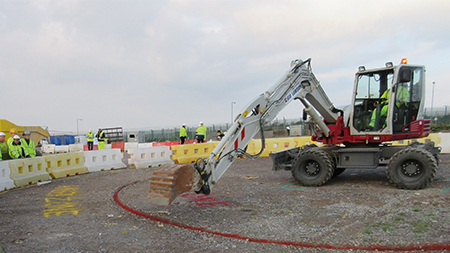 Sellafield's executive project director endorsed the model, along with the main contractors' divisional directors who saw the potential to apply it nationally in their own businesses if it proved successful.

"Once we got collaboration at the senior level, it was easy to move forward," he says. "It was a case of, 'This is what we're doing, we are changing segregation, we're making a step change in culture and we've got collaborative CEO buy-in'. If you work in the project delivery directorate, this is now mandatory."

Horton worked with the PDD partners to develop a pocket-size booklet for site operatives called People Plant Interface and Close Proximity Working to explain the rationale for the model. It includes a process map on applying the different levels of control, guidance on the three levels, the use of the PDD's standard signage, and examples of safe working arrangements.

They also developed a standards document covering the requirements for close-proximity work and a half-day training programme for workers engaging in this as well as engineers, management and supervisors. The training includes a written test, which workers must pass.

A key element is a practical exercise in which the operatives are shown how to set up a segregation area and the safe working radius for a piece of plant, such as an excavator. "They also get into the machinery so they can see where the blind spots are, what the plant operator can see, which has probably been one of the main benefits," Horton says. 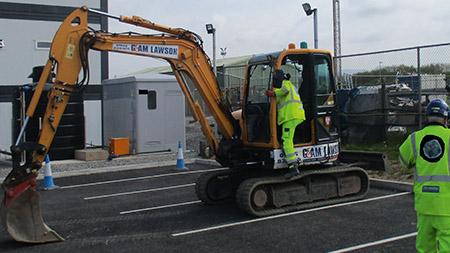 The simplicity of the system negated the need for a formal trial, says Horton. However, in February 2017, the PDD ran two short courses to sound out the hierarchy among operatives. The feedback, he says, was overwhelmingly positive.

"I ask this question at the end of every course: 'Can anyone tell me a situation where this will not work, where you cannot apply one of the risk zones?' The answer is always: you can apply it to anything.

"Where it will fail is discipline. When it's taken off site, it'll be where it's not properly managed or [when] operatives who carry out the work are not disciplined."

Horton says that the PDD operates a just and fair culture at Sellafield. Each breach is considered separately. Honest mistakes are accepted -- but there are consequences for rule breaking.

He explains that, though the hierarchy does not cover vehicle or driver inspections, a piece of new plant arriving on site is assessed to ensure it is fit for purpose, certified for use and in good working order. Before any work begins, a pre-use check is carried out. Equipment provider G&AM Lawson operates a plant tagging system for daily inspections, so everyone can ensure that a piece of kit has passed its check.

As for the plant drivers, the main contractor will check that they carry the Construction Plant Competence Scheme or Construction Skills Certification Scheme cards before they can operate on site. 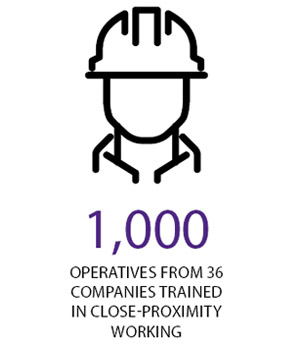 The hierarchy was introduced at Sellafield in March with a series of briefings. More than 1,000 operatives from 36 companies have now completed the close-proximity worker training. Throughout the process management emphasises to site operatives that they should feel able to stop work if they think that tasks are not being carried out safely.

In early September, the PDD completed a series of self-verification audits of the main contractors and projects. The PDD uses a process checklist to assess how the partners rate in using the segregation hierarchy. After the results were reviewed, a second stage of verification was carried out to ensure the standards are being met. This involved Sellafield as the principal contractor carrying out random checks on all of the main contractors and assessing their performance against each other.

"We'll then take that learning and anything we need to change and implement it," Horton says.

Once the final stage is completed by late October, the plan is to continue the training for all workers who require it within the PDD supply chain. "It is difficult to put a figure on this as the workforce is also changing and new projects are coming online," he says.

"We have around 4,000 workers at Sellafield in the current supply chain and training will be completed as and when it's required. The main contractors and supply chain partners can now deliver the course themselves."

Horton says he would be happy for anyone in the industry to contact him ([email protected]) if they have adopted a better approach or to review their own procedures to ensure the best safeguards are in place.

"Have a look at your plant and worker interface operations and ask yourself, 'Do we really need to put someone next to plant? Have we got the right segregation in place? What can we do differently and are we really safe?' We must all take the opportunity to make a step change in culture."