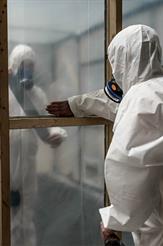 An Opinium survey of 500 workers found that 32% of respondents have never checked the asbestos register before starting work on a new site. Almost half of these workers (15% of the total sample) do not know about asbestos registers.

The survey was conducted ahead of today's launch of the fourth phase of IOSH's No Time to Lose occupational cancer campaign.

Nearly one in four workers (23%) told Opinium that they believed they may have been exposed to asbestos fibres.

Although 59% of respondents said they had been informed of the risks posed by asbestos and had had this reinforced regularly through training, 15% said that they had never been informed. Almost one in five (18%) admitted they would either be unsure or have no idea what to do if they found asbestos.

Dr Lesley Rushton, chair of the UK's Industrial Injuries Advisory Council, said: "What these new survey results confirm is that, while people have heard of asbestos and know what the effects of being exposed to it are, they are not sure how to check if it's present and they may not know what to do if they find asbestos."

Rushton said the results showed that "uncertainty and ignorance" was particularly prevalent among small companies, sole traders and older workers.

"It is crucial that we reach them, to inform them of the risks and how these can be managed, to ensure their future health is not compromised," she added.

Asbestos is banned in 62 countries. Although the UK restricted the hazardous material in 1999, many buildings constructed before this date contain it. Asbestos can be found in many products including spray coatings, lagging, insulation board, rope, yarn and cloth and is present across many industry sectors.

The Health and Safety Executive estimates that at least 5,000 people die every year in the UK from an asbestos-related cancer caused by workplace exposure, including the deadliest form of cancer, mesothelioma. Worldwide, asbestos claims over 107,000 lives a year.

At this morning's launch, IOSH highlighted a suite of free practical resources to help businesses reduce asbestos exposure, including a leaflet for employees that covers the risks and protection measures and case studies sharing good practice tips and experiences (IOSH Magazine April 2018, p 16).

"We are calling on everyone, including employers, to do the right thing; to protect the people who work for them," said Craig Foyle, IOSH president.

Asbestos management practices at developer Landsec -- the sole client member of the Asbestos Leadership Group, which has pledged its support for the next phase -- are featured in the May IOSH Magazine issue.