Thames Water: in the frame 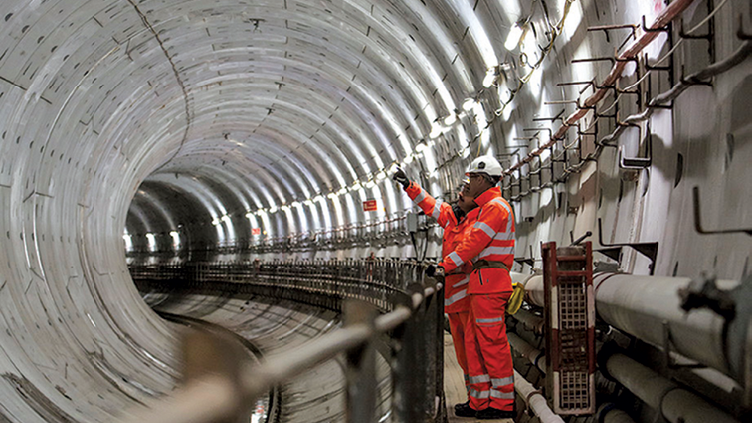 Karl Simons leads a 60-strong safety and health team that includes more than 30 OSH practitioners, eight trainers, six systems analysts, 12 inspectors, five occupational health specialists and a hygienist. As head of health, safety and wellbeing at one of the UK's largest utilities, Simons' priority is to make sure the skills of such a large group are the right ones to protect the company's workers and contractors.

New team members are matched to job role profiles to ensure they have the right aptitudes and experience when they start. But judging the progress and competence of those already in post, as their roles and experience change, hinges on personal development reviews.

"We've always been reliant on the skills of line managers showing the path and next steps to their subordinates," says Simons.

The institution asked the group's members whether they believed the OSH profession would benefit from a competency framework to map its skills and experience, and if so what it should look like.

You try to plan but in reality I'm looking back every few months and saying 'what have I done?' and uploading that as my CPD

The forum responded positively, Simons recalls. His own view was that a framework would be a much-needed replacement for ad hoc recording of reading and professional events to satisfy continuing professional development (CPD) requirements. "You try to plan," he says, "but in reality I'm looking back every few months and saying 'what have I done?' and uploading that as my CPD."

The prospect of a system in which individuals could map themselves against the skills and experience appropriate for different echelons of OSH practice and management and find out how to develop greater competence offered the chance to shift from a reactive programme to one where people could steer their own development. 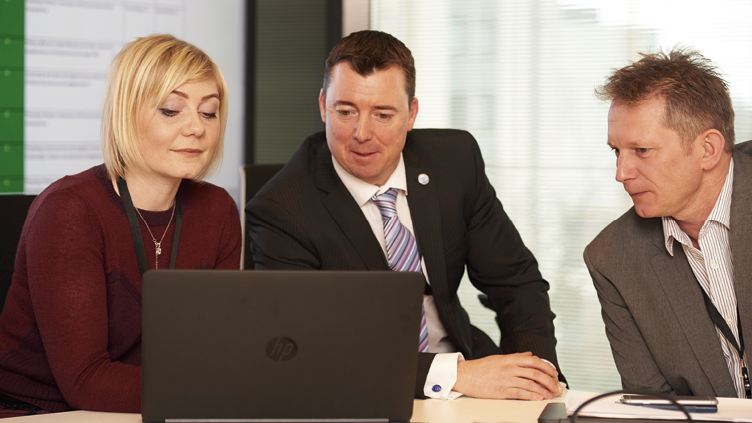 Once the framework had the go-ahead, the directors' forum met quarterly over the next three years, reviewing and refining work by IOSH staff to develop the structure and detail. "IOSH didn't rush it," says Simons. "There was a lot of debate on the health side in particular and how we developed a question set so people understood the difference between wellbeing, health and occupational hygiene.

"The biggest challenge for us was to extend it from being just a technical development into business leadership. The modern health and safety professional isn't just an investigator of incidents and inspectors of sites. My team is strategically aligned with the business's operating model and that's how we effect change and technical development among frontline managers and the workforce.

"That's what businesses are after now. Among my peer group, many of us report directly to the chief executive officers of the organisations we support and, over the past 15 years, I've watched the role of the health and safety professional evolve to this point.

"When chief executives interview now for a health and safety professional they are looking for a business leader. They expect you to have a team underneath you that has the technical excellence and they expect you to understand the technical side. But what they are now asking is 'how are you going to lead this organisation with me?'."

But he emphasises that the OSH leaders in the group were not just thinking of those at their own rarefied level and worked with IOSH to ensure it was applicable to practitioners at any stage of their careers.

"What I really like is that if you look at any level the steps are sensible ones," Simons says. "So if someone says they have no experience in how to communicate health and safety correctly, the steps are there for them to start."

IOSH had a dual aim for the framework: that OSH practitioners should gain a picture of their competence levels and what to do if they wanted to raise them; but also that, when individuals were willing to share their results with their employers, organisations could monitor the skills and development needs of their OSH staff as a whole.

"It was one of the questions we discussed in that first meeting three years ago," says Simons. "How do you influence an organisation's competency using the framework? If you start with the managers you can spot the gap areas across the organisation and begin to close them."

He was keen from the start to explore this in practice. "Straight away I said to IOSH 'let's use Thames Water's professionals as a pilot for how this is going to work in an organisation.'"

In January this year, 24 of his OSH team sat in a room and scored themselves using the framework assessment tool. Simons says participants were not selected but made up of those who were available on the day. However, the remaining team members will complete the assessment in the months ahead.

Most of those involved had been aware of Simons' involvement in the framework's development but they had no special preparation for the evaluation, "so they had no preconceived ideas", says Simons.

The results of the individuals' assessments were reports -- summarised in spider diagrams -- showing their attainment on the various technical and managerial measures. IOSH suggested training, reading or other development options that would help them achieve the level they had stated they would like to achieve.

"So it's not just saying 'you are weak on budgeting'," Simons notes, "but 'here's where you can go to get help with improvement'."

All the feedback from the January exercise was positive, he says. "Many of them said afterwards it was great to be involved and that the tool had asked them the right questions to be able to give a yes or no answer. It gave us a sense we had the question set about right."

The triallists were invited to discuss any development gaps in their reports with their managers at their next monthly one-to-one meetings and exchanged views on what the company could do to help them raise competence levels. "The important thing here is we aren't saying 'you have to do these things', " Simons says.

"It's helped the managers have those discussions based on science as opposed to what they know and understand at that moment, because they are all different."

He says he will be supportive of requests to progress through the framework. Far from being afraid of being inundated with requests for development funding, he says that would be a positive result: "In my three years at Thames Water I haven't said no to a single training request from any of my team."

He did not exempt himself from the assessment process and says his own report taught him that he could work on improving his expertise in sustainable business practice, managing change and data management.

One of Simons' team who went through the self-evaluation in January was Sean Luchmun, health, safety and wellbeing manager at Thames Water's waste water division, who joined the company last year from construction contractor Amey.

He says the assessment took about an hour: "I could probably have gone through it a bit quicker but I wanted to make sure I gave it the right amount of attention."

He had no surprises in completing the questions but they did give him plenty to think about: "One thing it raised was the business acumen side of things. It's very easy to get through the standard qualifications and find the business part is left to the side."

Luchmun says the assessment focused his mind on two issues: what he needed to do to be better in his job and where he would like to be in five years.

The first of these priorities was tackled in a development session in early March with his manager, the head of health, safety and wellbeing for the waste water division. "I shared my feedback from the framework and my line manager was more than willing to help expose me to those areas where I want more experience," he says.

Since one competence area he most wanted to develop was finance, they agreed he would manage the waste water health and safety budget for the coming year. The other aim was to understand more about the business's priorities and pressures. "So I'm going to be shadowing the senior management team at their meetings," Luchmun says. "And I'm going to have mentoring sessions with the managing director of waste water to see what challenges he faces." 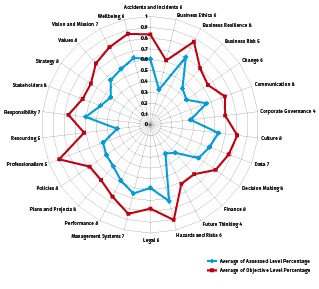 As well as giving individuals reports on their competency results, IOSH took the data from the exercise, analysed it and sent back an aggregated picture of where the members of the Thames Water OSH team were on the framework, along with their assessments of where they believed they should be. The results were summarised in a spider diagram (right).

Simons has since presented this initial analysis to his full team along with plans to invest to close the wider differentials in areas such as "strategy" and "future thinking". He says this important source of information on the strengths and weaknesses of the OSH function will only be enriched when the rest of the team has gone through the assessment.

"If I look across my body of professionals I should be able to know the trends of where I am against corporate objectives, so I can understand where as a professional function we are lacking and need to improve," Simons says.

The directors' forum was keen that IOSH try to offer employers the chance to assess their own functional data. IOSH head of membership Carolyn Issitt says that is precisely the plan. She can foresee a time when employers will be able to ask their OSH practitioners to attach electronic tokens to their personal competency records so the company can do its own aggregated analyses of how their staff map to the framework and to industry averages.

Simons plans to extend access to the framework beyond the company's OSH professionals. "Three years ago the Thames Water executive team made a decision that we would put all our 450 frontline managers through the Nebosh national general certificate in occupational safety and health," he says. "That's totally changed their understanding of practical application of health and safety law and risk management."

He believes those managers would benefit from access to the framework and is working with IOSH to put them through the evaluation.

Aside from the benefits to Thames Water, Simons is proud to have been involved in developing a free tool to help practitioners map their careers and increase their competence: "I may be biased because I have been so involved, but the true testament is my team are all enthused by having gone through it."