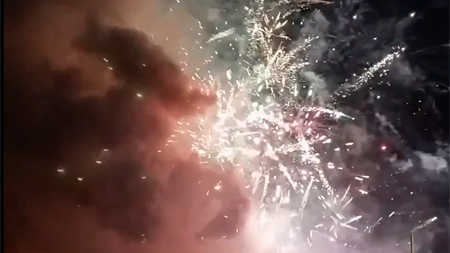 The Crown Prosecution Service (CPS) brought criminal proceedings against Richard Pearson, 44, who owned SP Fireworks on Tilcon Industrial Estate and who is reported to have said "there's going to be dead [people] in there because of me" after he escaped the burning factory.

An accidental ignition caused a mass explosion of fireworks that was reported to have lasted 40 minutes on the evening of 30 October 2014. It resulted in a blaze that was so intense the emergency services could not rescue Simon Hillier and Stewart Staples who were trapped in the building.

Hillier, who was working with Pearson, and Staples, a customer, both died from smoke inhalation.

An investigation by Stafford Police found Pearson had exceeded the maximum number of fireworks he was licensed to keep at the site. It said the boxes of explosives had been stored too close together and there were inadequate control measures to limit the spread of a fire.

Pearson said the explosion could have been caused by faulty electrics, someone throwing a firework through the window or a gas blast.

He denied two counts of gross negligence manslaughter but was found guilty on 22 May following a five-week trial at Stafford Crown Court.

The court was told that on 27 October Pearson received a delivery from China of 1,141 boxes of fireworks and 18 boxes of mortar firework launchers, which he stored in a container at a farm in Penkridge. On 10 November after the incident Trading Standards and Staffordshire Police visited the storage container and found that 488 boxes could not be accounted for.

Allan Compton, prosecuting, said it was likely most of those boxes had been kept at the other location, breaching safety and storage regulations. Pearson denied the claims and said the stock had been sold.

Pearson was badly burned in the fire but managed to escape before telling a witness the factory was "rammed with explosives". He also said to a paramedic that he was going to prison because "there's going to be dead [people] in there because of me", Staffordshire Police said.

Sentencing, Judge Michael Chambers, said: "You've known your culpability from the start, but you have chosen to falsely blame others."

He added that Pearson had "shown little remorse" and demonstrated "arrogant recklessness" for the safety of others".
Staffordshire Police's detective inspector Glyn Pattinson, who led the investigation, said: "Throughout his trial Pearson attempted to offer alternative explanations for the fire which thankfully the jury did not accept. He always sought to blame others and never once took responsibility for his own actions or showed any remorse for what happened that evening."

Elizabeth Reid from the CPS added: "Safety regulations and license requirements were flouted by Richard Pearson with devastating consequences. He had many years of experience handling fireworks and would have known full well the dangers that existed in running his business the way he did.

"The CPS presented evidence which showed that Pearson's failures caused the deaths of two men and were so serious and so fundamental that they can properly be categorised as criminal."