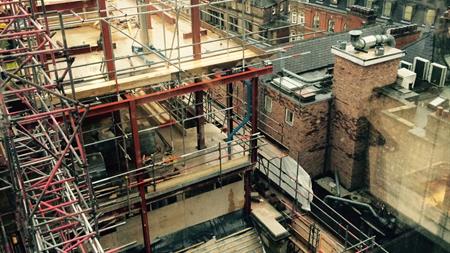 Manchester Magistrates' Court was told that David Mullholland, a 25-year-old employee of a steel erection company, was working at height during a hotel development project in Manchester. On 21 January 2015 he climbed up the scaffolding to hammer some steel beams into position.

A nearby worker took the photo of Mullholland from their office window and contacted the HSE. Inspectors went to the site and questioned him.

They found that all contract workers had access to a full-time scaffolder on site to ensure safe working platforms were in place, but Mullholland did not ask him to make the area safe. He said the project was three weeks behind schedule and wanted to finish the job quickly.

The executive also found that Mullholland failed to use a tower scaffold that was available.

Mullholland, from Preston, Lancashire, pleaded guilty to breaching s 7 of the Health and Safety at Work Act for failing to take reasonable care for his safety and the safety of others. He was fined £1,400 plus £2,940 costs and sentenced to six months in prison, suspended for 18 months.

After the case, HSE inspector Matt Greenly said: "This case dealt with a serious work at height risk which would have led to a fatal incident. David Mullholland failed in his duty to protect his own safety while at work and also placed others at risk had he dropped any tool from the position he was seen in, some 27 m above street level. During the HSE's investigation he said that he did not appreciate how high he was.

"Never before [-¦] have I seen such a staggering disregard for personal safety. It is a matter of pure luck that no one was injured or killed. Many thanks go to the member of the public who reported their concern to us as they have been instrumental in saving the life of Mr Mullholland and arguable anyone below him at the time."