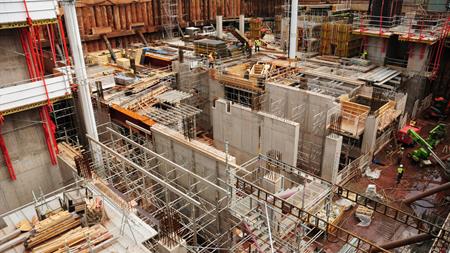 The September 2017 poll of more than 3,500 Unite members working in construction also found that 22% and 14% of sites were without hot and cold water respectively.

The findings revealed 17% of construction sites had no women's toilets. Lavatory facilities were described as "inadequate" by 18% of respondents; one in ten sites did not supply toilet paper and half did not have any showers, the study showed.

Workers also raised concerns over the cleanliness of their welfare facilities. More than 40% said toilets were not cleaned daily and less than half said there was enough soap or sanitary bins at their workplace.

Speaking about the findings at the Institution of Civil Engineers Health Summit in London on 22 January, Unite's national officer for construction Jerry Swain said: "Welfare facilities are at the heart of any good construction site [-¦] This is not the message we should be sending out in 21st century Britain. We should be telling our workers that they are valued [and] that their health and welfare are valued by their employer.

Construction contractors must provide welfare facilities under the Construction (Design and Management) Regulations.

Gail Cartmail, assistant general secretary at Unite, said: "Providing toilets and washing facilities is not a luxury; they are a basic human right. This survey must act as a wake-up call to the construction industry.

"Companies that fail to provide decent welfare facilities can and should be prosecuted and this is an area where Unite is working with the Health and Safety Executive to ensure standards are improved.