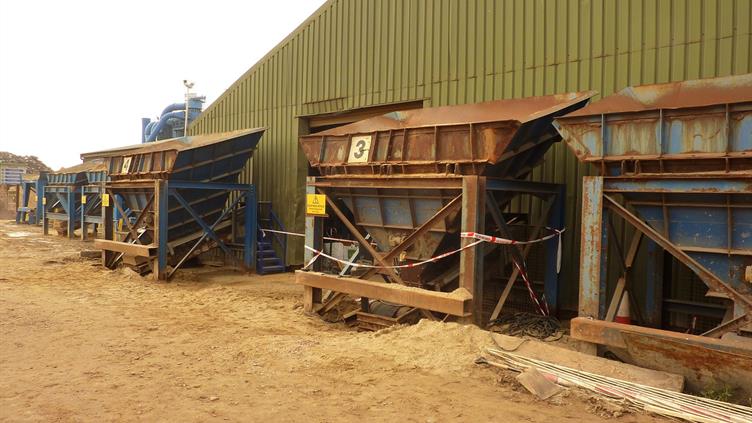 William Ridge was drawn into the roller of an in-feed conveyor at Hanson's aggregates bagging site in Dagenham Essex and died. The conveyor's guard had been removed a few days before the incident.

The conveyor, which fed a bagging line for construction sand, started under a hopper outside the plant into which deliveries of building aggregate were delivered. HSE principal inspector Stephen Hartley led the executive's prosecution and told IOSH Magazine the end of the conveyor on Line 3 (pictured above) had been shedding sand the day before, so Hanson workers, including 26-year-old Ridge, had been digging out built up material around the tail end drum to keep the line going.

Hartley said it is not clear whether Ridge was trying to fix the line or just to remove accumulated sand when he was drawn into the exposed in-running nip between the drum and the belt, but closed circuit TV footage of the back of the plant seized by the HSE showed the box guard which would have prevented access to the roller had not been in place before the incident.

"The guard was found under a mound of sand," said Hartley. "It had been held in place by four nuts and no nuts nor any tools were recovered from the scene -¦ which was consistent with the guard being off for a few days."

Hartley said Hanson has sophisticated management systems, produced evidence that Ridge and his colleagues had been well trained and that he had filled in a preproduction sheet which asked if all the guards were fitted.

"Hanson accepted that the fundamental issue was failings in supervision and failing to have an effective guarding inspection regime," he added, noting the company had adopted an enhanced inspection regime for some bagging lines before Ridge was fatally injured. "Line 3 was one of the ones they hadn't quite got to," he said.

Hanson Packed Products admitted a charge under Section 2(1) of the Health and Safety at Work Act and at Southwark Crown Court on 17 December was fined £750,000 plus prosecution costs of £29,511.
Hartley said the fine was considerable for what was a "relatively narrow breach", albeit a fatal one.

"This was not a company that was doing absolutely nothing, or had scant regard for its workers or was putting profit before other factors," he said, but noted that Hanson had been fined in 2010 for a conveyor fatality at another site and that it had been one of the parties convicted in a separate fatality case earlier in the month.

The judge had referred closely to the 2009 sentencing guideline for HSW Act offences causing fatalities (due to be superseded next month) taking into account both a serious shortfall in Hanson Packed Products standards, its turnover of £44 million last year but also its early admission of guilt in arriving at the penalty.