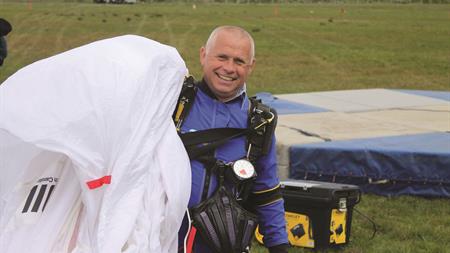 As soon as I reached the minimum age of 16, I did my ground training and jumped the same day. In 1998 my dad passed the business on to me, so I've been in or around the sport for more than 45 years.

Our family's parachute centre is affiliated to the British Parachute Association and so I progressed through its category system of jumps. The first three jumps are descents on a static line, where the parachute opens automatically. Each jump is assessed: if you do it competently you can move to the next one; if not, you repeat the jump. As you progress, you go higher up in the aircraft, completing freefall descents using a ripcord to deploy the parachute. By the time you qualify, you're leaving the aircraft at 3,048 m and performing manoeuvres: back loops, turns, barrel rolls, and so on.

After jumping every weekend over a four-and-a-half month period, I'd done 54 jumps and qualified. I'd always wanted to be up with the professionals who competed and broke records, and at 17 I entered the British national championships in the junior section of the 'precision landing' discipline. The aim is to guide your parachute to the dead centre of a defined area that is only 5 cm in diameter. An electronic pad records where you land -- usually your foot hits first -- and you're judged by your total, accumulated, score over ten jumps. I won gold. By the time I was 20 -- after around 200-250 practice jumps -- I had become the British senior precision landing champion, and was selected to compete at the 1986 World Championships in Turkey. I went on to compete at world championships in Russia, the Netherlands and France, to name a few.

Skydiving gets the adrenaline pumping -- you're leaving a plane with a parachute on your back and you know you're going to impact the ground at some point. There are so many different disciplines to try, and they're changing all the time: freestyle, jumping with boards on, new manoeuvres. The sport is becoming more refined and more exciting.

There are people who are really up for it, then you get them in the aircraft and they blank out and can't do it

The excitement from jumping out is still there, because I'm always learning new techniques. At our centre in the Lake District the views are amazing: you can see Lake Windermere, Lake Coniston and Scafell Pike.

My employer, Lancashire County Council, was always very gracious about allowing me time off to compete, and my day job as a health and safety manager fits in well with skydiving. Until recently, the sport had an 'operations manual' but no full safety management system. Because of my health and safety experience, I've always had a good understanding of the risks -- which vary according to the centre you're jumping at, because of the different geography. About ten years ago, I helped to get a safety management system put in place. Since it was rolled out in 2009/10, numbers of accidents and incidents have fallen. Each year we've taken on feedback from centres, and we've developed a suite of generic and specific risk assessments for different 'drop zones'.

Skydiving at the weekend can feel a bit of a busman's holiday. I'm always looking at potentials: if something doesn't look quite right, I'll always check it. You can't switch off your safety and health mindset: on a freefall I'm always aware of my surroundings -- of where everyone else is. I'm dynamically risk-assessing all the time.

I qualified as an instructor in 2000; at work I train a lot of people, so I managed to pass first time. It's fantastic to take someone from 'civvy street' and, by the end of the day, see them jump out of a plane on their own. The thrill they get is awesome. It's fulfilling teaching someone who has never jumped before, and seeing them complete the category system in what can be a few weeks.

There are people who arrive really up for it, then you get them in the aircraft and they blank out and can't do it. We never push people out; if they change their mind, that's fine -- although we encourage people to say while we're still on the ground if they're feeling hesitant or have questions. Sometimes people choose to do a tandem rather than a solo jump. This allows them to experience freefall -- and that sometimes encourages them to book a course and experience it again.

Each centre has its own requirements for skydiving. Ours has a weight limit of 95 kg, and you have to be under 55 to train for a solo descent. You can do a tandem jump at any age though. We get all sorts: charity jumpers, stag and hen parties, millennials crossing skydiving off their bucket lists, and war veterans in their 90s.

Personally, my most memorable jump was into Preston North End Football Club's ground on the day the team won promotion into the Championship. A group of us was invited to skydive into the stadium wearing the new strip for the next season.