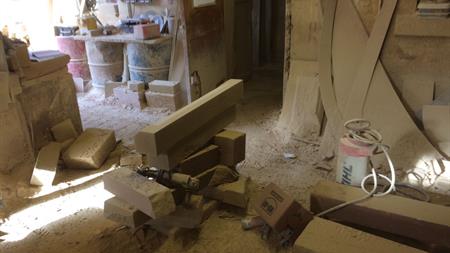 Burnley Magistrates' Court was told that workers at Go Stonemasonry were exposed to respirable crystalline silica from working with stone for several years prior to 2017.
Health and Safety Executive (HSE) inspector Sharon Butler said the company could have taken "simple steps to stop workers breathing in the dust".
The regulator's investigation found Go Stonemasonry did not have a suitable dust extraction system in place at its site in Accrington, Lancashire, and had failed to ensure that respiratory protective equipment was adequately controlling the inhalation exposure to respiratory silica dust.
It said: "The company did not have appropriate work processes, system or control measures in place and had no health surveillance to identify any early signs of effects on workers' health."
Go Stonemasonry pleaded guilty to breaching s 2(1) of the Health and Safety at Work Act. It has been fined £8,000 and ordered to pay £10,000 costs.
Speaking after the conviction, Butler said: "Silica is found in most rocks, sand and clay and in products such as bricks and concrete. In the workplace these materials create dust when they are cut, sanded or carved. Some of this dust may be fine enough to breathe deeply into your lungs and is known as respirable crystalline silica. Exposure to this dust can cause silicosis, leading to impaired lung function, breathing problems and is life threatening."
Topics:
Hazardous substances
Personal protective equipment
Manufacturing and engineering
News