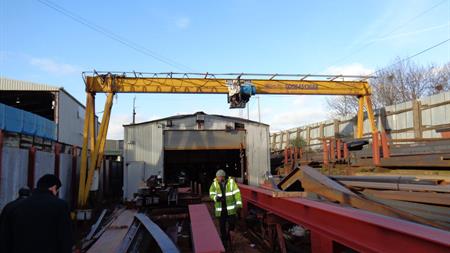 As we reported last month, the Health and Safety Executive (HSE) issued William Fry Fabrications (WFF) with an improvement notice in February 2011 after inspector James Caren found it had not thoroughly examined and inspected its lifting equipment as required by the Lifting Operations and Lifting Equipment Regulations (LOLER).

WFF had two cranes on site: an Elephant chain hoist with a 500 kg capacity used inside the warehouse; and a larger outdoor Cobal Goliath travelling crane which had a safe working load of 4 tonnes.

After receiving its improvement notice, WFF requested the HSE grant it an extension on the basis it couldn't find an engineer to carry out the work. The extension was given.

When Caren revisited the site in April 2011 he found WFF still had not carried out thorough examinations on the cranes, which remained in use. He concluded that further use of the equipment would pose a risk of serious personal injury to the company's staff and issued a prohibition notice. Only then did WFF arrange a full examination and both cranes were back in service by the end of May 2011.

In January 2015 HSE inspectors Saif Deen and John Spence went to WFF's London site. They found the same two cranes had not been thoroughly inspected since 2011 and the company therefore had breached LOLER again.

Spence, who took the case to court, told IOSH Magazine he carried out some research into contracting an external engineer. "Arranging a thorough examination is a relatively straightforward task," he said. "There are lots of engineers who will do the work and it does not cost a vast amount of money. I sourced three indicative quotes for the work at WFF and was quoted from £375 plus VAT [Value Added Tax] to about £650 plus VAT for both cranes. That's if you go to an external vendor but the large insurance companies will generally include a thorough examination as part of the overall package for lifting equipment."

The HSE decided to prosecute and on 17 February this year Westminster Magistrates' Court heard how WFF, which represented itself, had its cranes serviced the day after Deen and Spence visited its premises last year. But, as Spence said: "Servicing the cranes is not the equivalent of a thorough examination. At best it is part of a scheme of preventative maintenance which we would encourage all businesses to perform. However, thorough examination and inspection of lifting equipment is an absolute legal duty."

The engineer who serviced the two cranes found the Cobal Goliath was structurally deficient and recommended it was taken out of operation. "A thorough examination would have identified that far sooner," said Spence.

The HSE also found, in many cases, WFF had the cranes serviced only after they broke down, "which is at the point of greatest risk to employees", the inspector said.

WFF pleaded guilty to breaching Regulation 9(3)(a) of LOLER. The judge issued an early guilty plea discount of one third and fined the company £13,333 plus costs of £2,527. "The court felt that the likelihood of risk eventuating was high because the breach persisted over a period of nearly three years, and that the seriousness of harm risked was high. The poor repair of the crane was also taken into consideration," said Spence.

An engineer last inspected the two cranes in November 2015 and found them compliant. He advised WFF to have them thoroughly examined more frequently because they are very old.