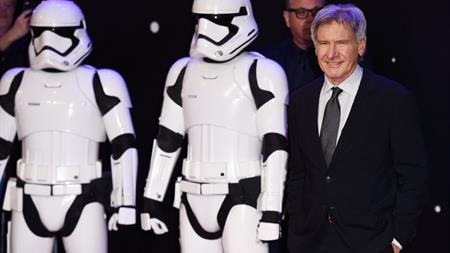 Ford was on the set of the Millennium Falcon spaceship at Pinewood Studios in Buckinghamshire when he was struck by the rapidly-closing heavy door and pinned to the ground. He sustained a broken leg and a dislocated ankle and had to be airlifted to hospital.

A spokesman for the Health and Safety Executive (HSE) said "the power of the door's drive system was comparable to the weight of a small car". Ford was 71 when the accident occurred on 12 June 2014.

Foodles Production pleaded guilty to breaching Sections 2(1) and 3(1) of the Health and Safety at Work Act at Milton Keynes Magistrates' Court.

The company was also due to face charges under Regulation 3(1) of the Management of Health and Safety at Work Regulations, which cover suitable and sufficient risk assessments, and Regulation 11(1) of the Provision and Use of Work Equipment Regulations, which require equipment to be safe to use. However, these charges were withdrawn and will be incorporated into the two admitted breaches.

The case has been transferred to Aylesbury Crown Court with the date to be confirmed, according to the HSE.

"The British film industry has a world renowned reputation for making exceptional films. Managing on-set risks in a sensible and proportionate way for all actors and staff -- regardless of their celebrity status -- is vital to protecting both on-screen and off-screen talent, as well as protecting the reputation of the industry," said the HSE spokesman.