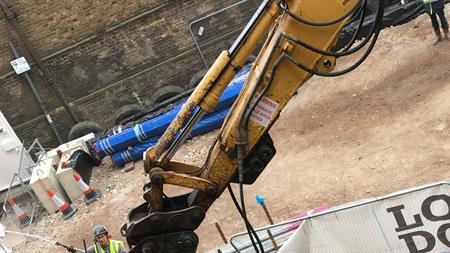 The engineer, who had to be freed from under the bundle, sustained fractures to both ankles and on his right leg.

The Health and Safety Executive (HSE) investigation found the engineer, who was accompanied by two managers at the former News International site in Wapping, east London, where the Times and Sun newspapers were formerly published, had approached four unattended bundles of scaffold tube stored on the ground when the incident happened on 15 September 2015. One of the bundles, which weighed about a tonne, had been stacked on top of the other three and rolled off when it was disturbed.

St George City, the principal contractor for the Times House site, was overseeing demolition work in a confined footprint.

PHD Modular Access Services, which had delivered the scaffold bundles earlier that day, had failed to ensure that the control measures to prevent access by unauthorised persons specified in its own risk assessment were in place. The risk assessment said the storage area had to be fully segregated using physical barriers.

St George City had signed off on the scaffolding firm's storage requirements and should have been conscious of the difficulty of delivering materials to and storing them on a site with limited space. On the day of the incident, its site management had become aware that the scaffold materials were not fenced off but took no action.

St George City, part of the Berkeley Group, of Berkeley House, Portsmouth Road, Cobham, Surrey, pleaded guilty to breaching reg 13 of the Construction (Design and Management) Regulations 2015. It has been fined £130,000 and must pay £7,831 costs.

PHD Modular Access Services, of Oxford Road, Denham, Uxbridge, pleaded guilty to breaching reg 15 of the same legislation. It has been fined £50,000 and must pay £7,778 costs.

HSE inspector Gabriella Dimitrov said: "The contractors knew that it was a congested site with large demolition machines tracking around and as such required careful planning with regards to material arrivals and storage. The incident could have been easily prevented had suitable barriers been provided."