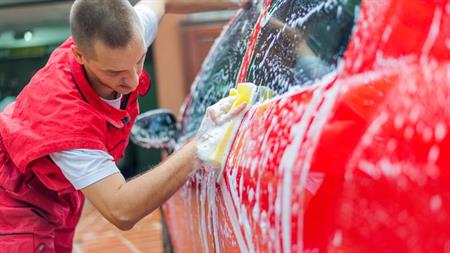 It found most premises were compliant with their legal obligations under safety and health law, however two gave cause for concern.
The move comes after a man was arrested in January last year on suspicion of human trafficking and money laundering.
In a statement the local authority said it was "the first to have screened all of the borough's hand car washes".
It said the investigation was carried out during the summer of 2018 following approval from the Health and Safety Executive (HSE), which regulates safety at hand car washes.
"Through prior consultation it was agreed that the council's approach would be informal and the project would operate in collaboration with other agencies," it said.
Of the 28 potential hand car wash businesses in the area, 17 were operational with 88% of these found to be in compliance with health and safety regulations.
As part of the investigation council officers distributed information packs on employers' duties to protect the health, safety and welfare of their employees and others who might be affected by the business.
They also gave advice on improving and maintaining safety standards, including the elimination of hazards.
The main issues, the council said, were the storage of chemicals, the proximity of electrical equipment to water sources, and the provision of adequate personal protective equipment for workers.
In terms of modern slavery, Southwark Council said there are some key signs, including evidence of sleeping facilities; workers appearing scared, avoiding eye contact or being untrusting; signs of injury, abuse or malnourishment; workers appearing unkempt or with poor personal hygiene; and young people working, who should be in school.
Officers reported two premises to the appropriate authorities over concerns of the presence of modern slavery and poor workplace safety practices.
The HSE visited both sites and made recommendations to the operators to ensure full compliance with the relevant legislation.
The Gangmasters and Labour Abuse Authority (GLAA) found no direct evidence of modern slavery but is continuing to monitor the situation, Southwark Council said.
Councillor Victoria Mills said: "Modern slavery is the scourge of 21st century employment. The trafficking and enslavement of people preys on the vulnerable, creates dangerous working conditions, is often run by criminal gangs and undercuts legitimate local business. This is why the council has prioritised seeking out those guilty of perpetuating modern slavery and poor working conditions.
"I am happy to learn that the vast majority of hand car washes in Southwark are compliant with health and safety law and gave no indication of poor employment or modern slavery practices. But I will follow further investigation into our findings with much interest."
Separately, a smartphone app designed to help raise awareness of modern slavery in hand car washes, was used more than 2,000 times in the first five months of its release.
Drivers can use the Safe Car Wash app to log the location of the hand car wash and report issues such as access to suitable clothing, living arrangements, the presence of minors working on site, and the cost and method of payment.
It was launched on 4 June 2018 by the Clewer Initiative -- the Church of England's campaign against modern slavery, and the Santa Marta Group -- the Catholic church's anti-slavery project. They generated a dataset including app users' responses from 26 June 2018 to 3 December 2018 and shared it with the Rights Lab at the University of Nottingham for analysis.
They found that two-fifths (41%) of the 2,271 cases reported showed a likelihood of modern slavery in the hand car washes. However, only 18% of those who were advised to call the Modern Slavery Helpline did so.
Organisers said this was "disappointing" but stressed that users are "urged to make sure that they are in a safe place before calling so it may be that they chose to report their concerns to the helpline when back at home".
They also found that in nearly half of reports, or 48%, workers did not have access to suitable protective clothing such as gloves or boots, despite many hand car washes typically requiring their workers to use potentially harmful chemicals such as hydrochloric acid.
Nearly one in ten, or 8%, of reports logged that minors were working on site, and 17% of users identified fearful workers.
Anonymous data collected from the app is shared with the National Crime Agency, the GLAA, and the National Police Chiefs' Council.
Topics:
Regulation/enforcement
Violence at work
Wellbeing
Transport and logistics
News