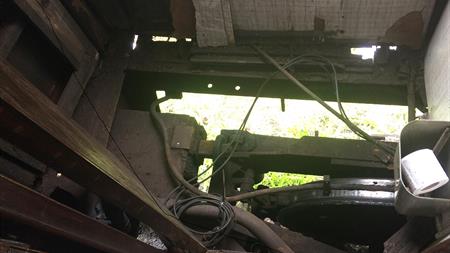 As previously reported by IOSH Magazine, the incident happened on 22 June 2017 in a carriage pulled by a steam locomotive between Totnes (Riverside) to Buckfastleigh. The railway is owned and operated by the South Devon Railway Trust (SDRT), trading as South Devon Railway.

The train was travelling at about 32 kmph when the three-year-old and his mother, Anna Patch, entered a toilet cubicle.

The toilet was marked "out of use" but the child had already opened the door. He stepped inside the cubicle and fell forward on to a brake pipe. His mother grabbed his arm and prevented him falling through the opening.

An investigation by the Office of Rail and Road (ORR) found the toilet cubicle floor had been missing since 2 April, when SDRT's maintenance team had removed it to repair the leaking brake pipe underneath. They found the underframe had badly corroded and there was wood rot in the floor and partition walls.

SDRT instructed its workers to mend the brake pipe but decided to delay the other structural repairs until June so that the train could run over an upcoming bank holiday weekend. On 13 April a fitter taped a warning sign to the door, securing it with screws through the frame, and the carriage entered service with the toilet floor missing.

The ORR said that at some point between 13 April and 22 June, part of the wooden doorframe had broken off and the screws that were supposed to be holding the door closed had fallen out.

The regulator criticised SDRT for failing to regularly check that the door was firmly fixed and argued the company had only allowed the train to remain operational due to the upcoming Easter holiday, when it would run nine roundtrips a day.

The ORR served an improvement notice in July that year for SDRT to implement an established safety management system after it found the existing one was ten years out of date and not fit for purpose.

The chief inspector of railways, Ian Prosser, said: "South Devon Railway Trust took an exceptionally casual approach to ensuring the safety of its passengers and created a genuine and unacceptable risk to the public."

A spokesperson for SDRT said: "South Devon Railway takes the safety of its customers and staff very seriously, and has put every effort into making improvements to its systems, including a new safety management system, to ensure that this incident could not happen again.

"This includes complying with the requests of the ORR, and going further to put in place new infrastructure to modernise our approach to carriage maintenance.

"Whilst the fine we received is a significant one, we have been making contingency plans for it and also have a helpful period in which to pay. As a result, the SDR will continue to operate our popular heritage steam trains and services as normal."