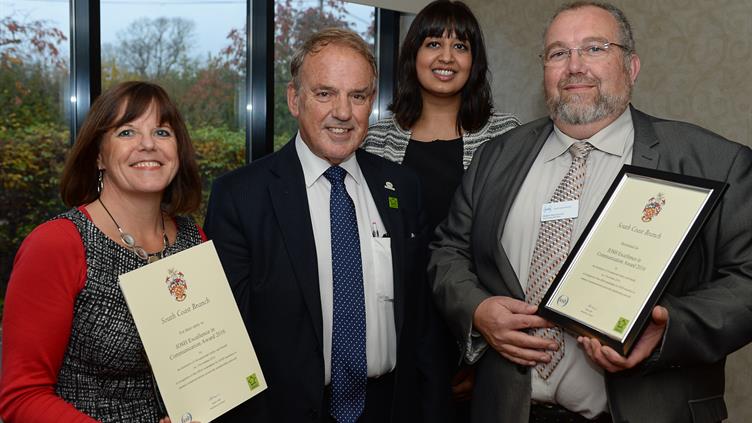 A project run by IOSH's South Coast Branch to promote occupational safety and health awareness among apprentices has been named the winner of the Institution's Excellence in Communication Award (ECA) 2016.

The IOSH South Coast Branch Apprentices Safety Awards was held to ensure that safety and health plays a part in the training and work activities of apprentices.

Such was the success of the project, the branch's committee has decided to keep it running in future years. The winners were a team of apprentices from the Royal National Lifeboat Institute (RNLI), who examined how hazardous substances are controlled at their base in Poole, Dorset.

The branch was announced as the winner of the ECA during IOSH's annual Networks Conference, held at Chesford Grange Hotel in Kenilworth, Warwickshire, on 1-2 November.

Branch Chair Nick Burchell said: "The interest shown by the apprentices, the high standard and the attention to detail within their submissions was very impressive. Most pleasing for the committee was seeing the project raising awareness of our profession and introducing young people to IOSH -- future members perhaps.

"In celebrating the health and safety achievements of apprentices, this initiative is a truly collaborative effort in bringing together a wide range of people from very diverse industry sectors -- branch committee members, IOSH staff, the apprentices themselves and the support staff of those apprentices -- to successfully achieve a common goal, to help further develop young people to a healthier, safer future in the world of work."

The trophy given to the RNLI apprentices was named after Allan St John Holt, a past president of IOSH. In total, eight entries were received.

ECA judges were impressed with the way the branch managed to find the most appropriate audience. Before targeting apprentices, they had looked at schools, colleges and youth organisations such as Scouts and Guides.

Andy Crockford, Promotion, Advertising and Design Manager at IOSH, who led this year's ECA, said: "The standard of entries was very good. The South Coast Branch was impressive in many ways, including how they managed to take an alternative route to find its target audience with this project.

"There were many strong points from the other entries and we congratulate them all for taking part in this year's awards."

IOSH hosts the ECA annually to recognise the efforts that its networks have gone to in promoting occupational safety and health. Members and committees were invited to make a nomination, with 12 entries being received. Those entries were whittled down to a shortlist of five.

Along with the South Coast Branch, also shortlisted were (in no particular order):

The remaining entries were (in no particular order):