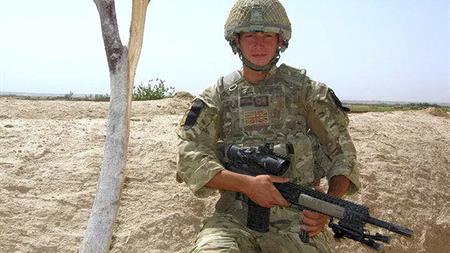 Corporal Joshua Hoole, a 26-year-old infantry solider in the Rifles regiment, had finished an eight-mile fitness test and is said to have collapsed after arriving back at the barracks. Ambulances and the Wales Air Ambulance were sent to the infantry training centre at Dering Lines just before 9am.

The temperature was 17°C when the soldiers started the test and 21-22°C when they finished. Temperatures that day climbed to around 30°C.

The fitness test, which was part of pre-course training for the Platoon Sergeants' Battle Course (PSBC), is an eight-mile march carrying a 25 kg load. Soldiers were two days into the two-week programme when Hoole died on 19 July. From Ecclefechan, near Lockerbie, Dumfriesshire, the soldier was serving in the Rifles regiment at ITC Catterick.

On its website, the British Army says the PSBC is "a promotion qualifying-course, to sergeant, for Rifle Company platoon sergeants", and "is both mentally and physically demanding -- but students receive the highest level of tuition and testing to ensure they are fully prepared for the rigours of command".

The cause of death is not yet known. Dyfed-Powys Police is working with the Ministry of Defence (MoD) to investigate the fatality. A service inquiry -- held after a military incident involving death or serious injury -- will also be held.

Defence minister, Mike Penning, said: "It is with great sadness that I can confirm that an infantry solider has died in Brecon while conducting pre-course training before attending the Platoon Sergeants' Battle Course. The safety of our personnel is our absolute priority and, while deaths in training are rare, any death is a tragedy. As well as a police investigation, a service inquiry will take place. My thoughts and prayers are with the soldier's family, friends and colleagues at this difficult time."

The death of Hoole comes three years after three soldiers died on a 16-mile SAS training exercise, also in the Brecon area of south Wales.

On 13 July, Corporal James Dunsby and Lance Corporals Edward Maher and Craig Roberts were on a training march trying out for places in the SAS reserve. They fell ill and collapsed after the temperature reached 27°C.

The MoD, which has Crown immunity and therefore cannot be prosecuted for its offences, was issued with a Crown Censure by the Health and Safety Executive after it found the MoD failed to plan, assess and manage risks associated with climatic illness during the training.