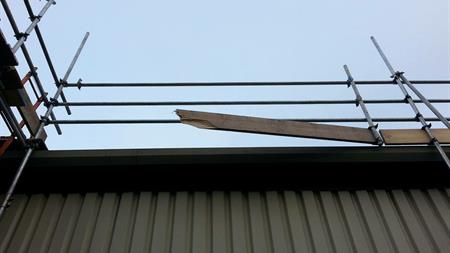 Jhanade Ryan was installing solar panels on the roof of roofing and cladding sheeting manufacturer Firth Steels, when he slipped on the fragile surface in Brighouse, West Yorkshire, in December 2015.

The subcontracted roofer, who was working for solar power firm Centreco (UK), slid down to the edge protection and fell 5 m through scaffolding when the toe board snapped. He landed on a sub-station roof and sustained a spinal fracture, a broken coccyx and nerve damage. Ryan spent almost three months in hospital but has been left unable to work by impaired mobility.

The Health and Safety Executive (HSE) investigation found that Oswestry Shropshire Scaffold had failed to erect the scaffold to a known industry standard or design.

The Work at Height Regulations 2005 require a scaffold to be assembled to a recognised standard configuration such as the National Access & Scaffolding Confederation's TG20 for tube and fitting scaffolds or similar guidance from manufacturers of system scaffolds. When this isn't possible, the erection should be designed by a competent person to ensure it will have adequate strength, rigidity and stability while it is erected, used and dismantled.

The HSE also identified roof lights on the fragile surfaces. It found that Centreco (UK) had failed to put in place effective measures to prevent workers from falling through fragile roofs.

Chorley, Lancashire-based Centreco (UK) pleaded guilty to breaching s3(1) of the Health and Safety at Work Act at Leeds Magistrates' Court on 6 June. The company has been fined £33,500 and must pay £945 in costs.

Oswestry Shropshire Scaffold also pleaded guilty to breaching s3(1) of the HSW Act. The scaffolding company has been fined £28,800 and must pay the same costs.