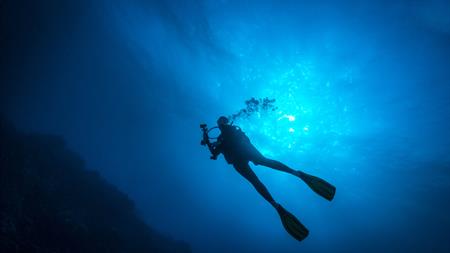 Roderick MacLean, 33, had been diving for scallops off the Orkney island of Eday in Scotland on 15 March when he failed to surface.
The search for his body was called off after five days and his remains were not located until November of that year.
The Health and Safety Executive (HSE) said Shaun Geddes, who owned the fishing boat, MV Hildona, from which MacLean had been diving, had not planned or managed the operation.
Its investigation found that Geddes had failed to ensure the divers at work had a valid certificate of fitness to dive and that they held an approved qualification valid for such an activity.
Additionally, a diving plan had not been prepared and those involved in underwater operations were not briefed beforehand.
Geddes pleaded guilty to breaching reg 4 of the Diving at Work Regulations and sentenced to 200 hours' community service.
HSE inspector Bill Chilton said: "[This] outcome will highlight the need for all parties involved in commercial diving projects to keep the health and safety of divers to the fore.
"We hope this sentence, which follows a detailed investigation into Roderick MacLean's death, will send a strong message to the shellfish diving industry that all individuals have a duty to plan and carry out work properly in order to protect workers."
Topics:
Safe systems of work
Agriculture and forestry
News