Simon Enderby Tech IOSH Managing director, Up and Under Group 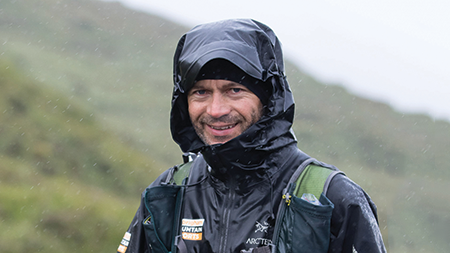 But, unlike a triathlon, you choose your own route, navigating via a series of checkpoints under specified time constraints. And there are other sub-activities, such as climbing, caving, gorge scrambling and coasteering -- in which participants cross the intertidal zone of a rocky coastline on foot or by swimming.

I've always enjoyed outdoor activities. In the early days I was a scout, and then I was a keen climber. One day I saw an adventure race in north Wales, and I thought I'd have a try myself. I already did mountain biking, paddling and running, so I entered an event as a solo competitor and I came in the top ten. I thought, with a bit of training, I could perhaps do something in the sport. That was 15 years ago, and I haven't really done any climbing since, as adventure racing took over.

I started by doing smaller races -- sprint events, which might last five hours on a Sunday afternoon -- and gradually I got in with the crowd. As you can imagine, there aren't hundreds and thousands of people doing it, so it's quite a close-knit community. After a while we got a team together. When it comes to the bigger races, you enter as a team of four usually.

I've taken part in events all over the UK: Scotland, Snowdonia, the Lake District and the Peaks. I took part in my first full 'expedition' team event -- lasting five days -- in the Lake District. I've also competed in the Pyrenees, and in 2008 my team won a place in the Abu Dhabi Challenge.

As a team, we don't train as such. An expedition race lasts between four and ten days, and with families and work commitments we don't have the time to train for days at a time, so it's more about keeping active. I might go with my family to the Lakes for a weekend and combine some running with a family adventure. But it's always been important to maintain a balance between enjoyment and achievement. If I'm going to take a week off work and be away from my family for an expedition event, I've got to enjoy it.

We did 30-plus hours trekking or running through the desert, I had blisters and I lost skin from most of my toes

One of the best things about adventure racing is the variety. I wouldn't want to run for 90-odd hours, for example. But with adventure racing, I can be mountain biking and looking forward to sitting in a canoe, then sitting in a canoe or whitewater rafting, and looking forward to walking. I also navigate, which is a mental challenge: problem-solving when deciding which direction to go, and taking account of changing weather, adds an extra discipline.

It's not a relaxing sport. At the beginning of an event, everyone tends to focus on the racing element, but after a few hours it becomes about the adventure. You need to have mental toughness, and strategy is important -- we even have to strategise for sleep, because you may get blocks of only two hours over several days. There will be low points. But there will also be highs, such as reaching the top of a mountain and watching the sun rise at 5am with a bird of prey flying overhead. It's amazing what your body can deal with. At an event in Scotland recently, I had my lowest point: one night I didn't want to eat or even speak; I was tired, I felt unwell, and I had to summon all my energy just to keep putting one foot in front of the other. Then a couple of hours later the sun came up, and slowly I began to feel better. It's such a buzz when you finish: knowing that you did 500 km on a few hours' sleep.

We're well prepared for emergencies on expedition events. Various items of equipment are mandatory, such as a first-aid kit and life jackets. Personal mobile phones aren't allowed because they could be used for navigation. However, each team takes a phone sealed in a tamper-proof bag that they can open if they need to summon help. When you complete a race, the organisers check the bag's seal is intact. Each team carries a tracker so friends and family can see where you are, but also the organisers can track your progress in case you stop for a long time or venture far off-course. The tracker usually has an SOS button for raising the alarm.

My most memorable experience was probably the Abu Dhabi Challenge. We were a fairly novice team, so having the opportunity to take part was brilliant. I did suffer: we did 30-plus hours trekking or running through the desert, I had blisters, and I lost skin from most of my toes. But it was amazing -- not least the 82 km paddle into the Arabian Gulf.

The mental toughness you develop through adventure racing, and the need to look rationally at challenging situations, are things I bring to work; I'm better at adapting plans when things change, whether it's something financial or risk management. Similarly, my day job helps me when I'm racing: before I climb a mountain I'll check the weather and assess the risks. Adventure racing is a team sport at expedition level, and you have to get everyone to the line fit. It's the same at work: you need to get a good team together.

These days there are lots of businesses offering outdoor events. But for a 'real' adventure racing experience, you are best off starting with a shorter, 'true' adventure race or an orienteering or fell-running club, and going from there.