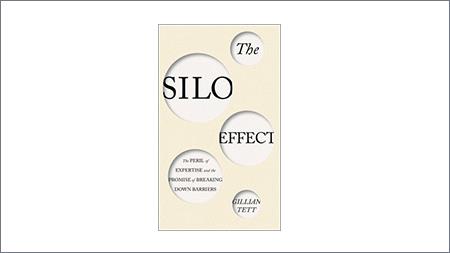 Tett is an anthropologist by background, so someone well versed in the norms, taboos and subtle behaviour that defines who is "one of us" and who is an outsider. She uses this expertise to shed light on how silo thinking can make corporate bodies dysfunctional. In extreme cases, this manifests itself in behaviour that champions the interests of the team to such an extent that it threatens the organisation's overall wellbeing. Examples include cases of police officers who judged it more important to protect their colleagues from criticism than to co-operate with an outside investigation, and bankers who took huge risks with their employer's money to maximise their desks' profit figures -- and their bonuses.

The first of the book's two sections contains case studies of organisations that came to grief as a result of silo thinking. These include Sony, which lost out to competitors such as Apple and Samsung because internal fiefdoms prevented deployment of the organisation's world-class expertise to meet new internet-age market opportunities. We learn from the history of Swiss bank UBS, where silo thinking blinded senior managers to their exposure to the US subprime mortgage market. UBS was respected for its risk-averse approach and employed hundreds solely to evaluate and manage risk; yet key teams operated in isolation and, in the crash that followed, the bank had to be bailed out by the Swiss government.

In the second part, Tett puts forward practical solutions. Organisations need to work to prevent construction of silo walls and to minimise their impact where they already exist. Facebook is cited as a firm that does this effectively; its measures include common inductions for staff regardless of expertise or role, open office architecture that practically forces people to talk to colleagues in other teams and a tactic of shuffling people around to create new opportunities for collaboration and innovation.

This book is beautifully written and excellent value. The perils it considers are mainly business risks -- losses and lost opportunities -- rather than those of injury and ill health. Nevertheless, I strongly recommend it to fellow practitioners since the message is that silo thinking can prevent your organisation meeting its objectives.