Sign maker sent workers back onto unsafe roof after fall 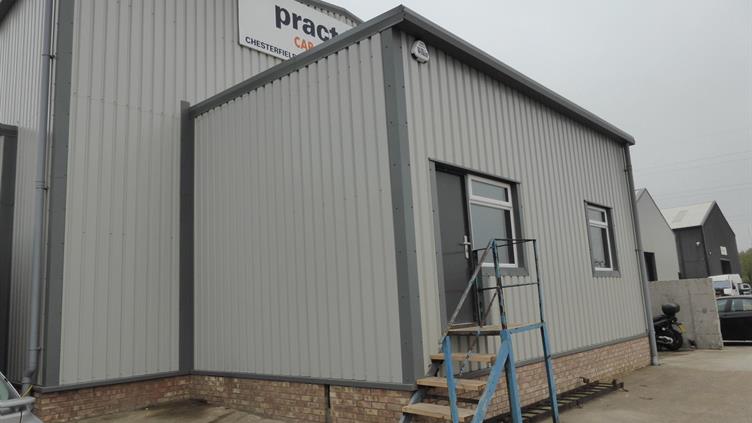 As we reported last week, Practical Car and Van Rental Chesterfield contracted Sheffield-based Warburton Signs to install a large, lightweight sign to the gable end of an industrial building. Three operators had been assigned to the task and on 13 April 2015 they were fitting wooden batons to the building, to which the sign would be fixed.

The operators were carrying out the work by standing on the flat roof of a small office building that was attached to the main industrial unit. They had decided not to use a cherry picker. "Unfortunately they didn't come to any decisions in regards to how they were going to do the work safely," said HSE inspector Helen Barley.

At the time the worker fell, one of his co-workers was on the ground getting materials from the van. The second was climbing a ladder to access the flat roof. "We'll never really know how he fell," said Barley. "The nature of his injuries means he's lost much of his memory from around that time and he can't recollect the incident."

The Warburton employee fell 5 m, fracturing his skull and spine. He also sustained a collapsed lung and several broken ribs. He has not yet returned to work.

An investigation by the HSE into what happened found the company failed to implement any measures to prevent a fall from height. There was a generic risk assessment, however the work was outside the company's usual remit, so the assessment was inadequate.

"There were a number of opportunities for them to realise that they needed to put preventative measures in place but on each of those opportunities that arose nothing was done about it," Barley said, after she explained that the men visited the Chesterfield site a couple of times before starting the work.

Warburton Signs had only recently started the job when the accident happened and a week later, under the company's instruction, the two uninjured workers returned to the roof to finish fitting the sign. The client then complained about its alignment and the workers climbed on to the roof for a third time to rectify it.

"It was evident that, despite the risk being realised by the accident to the injured person, the necessary measures still hadn't been taken," said the inspector. "That repeated breach was a big concern."

She said the HSE would expect to see "collective prevention measures" at such a worksite, including scaffolding, clip-on edge protection, top and mid rails, and a toe board. "We'd be looking for secure ladder access as well," she added. "They just propped a ladder up against the building to access the roof."

At Chesterfield Magistrates' Court, Warburton Signs pleaded guilty to breaching Regulation 4(1) of the Work at Height Regulations, which requires every employer to properly plan and supervise work at height. It was fined £20,000 and a £120 surcharge, plus costs of £1,538.

Under the new sentencing guidelines for health and safety offences, corporate manslaughter and food safety offences which came into force on 1 February, the judge determined that the offence category was "high" and the risk of harm was "harm category 1" (level A seriousness of harm risked, high likelihood of harm). Warburton Signs was considered a micro company, providing a starting point for the fine of £160,000 (ranging from £100,000 to £250,000). The judge reduced the fine to £50,000 when considering proportionality and further reduced it to £30,000. The early guilty plea took the final fine to £20,000.