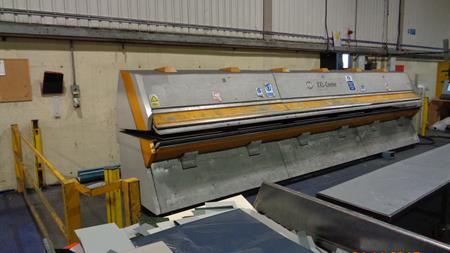 The fine was imposed on SIG Trading after the accident at its A Steadman and Son plant in Welton, Cumbria, on 21 October 2015.

His dominant left hand became trapped in the jaws of the machine and he had to have parts of four fingers amputated.

The Health and Safety Executive (HSE) investigation found the company had failed to ensure workers used the folding machine only when the guards were in place.

HSE inspector Leona Cameron told IOSH Magazine that it was "custom and practice" for operatives to circumvent the safety light curtain and carry the machine's control foot pedal into the danger zone. This allowed them to stand closer to the machinery than they should have done so they could work on small pieces of steel.

The workers would then "kick back" with their leg to interrupt the light beam, causing a signal for the machine to stop.

Cameron said: "The foot control pedal should have been bolted to the floor so workers couldn't move it in front of the light curtains. It was a very dangerous process that had developed."

Hook was inside the danger zone when the accident happened.

Carlisle Crown Court was told that SIG Trading was aware of this unsafe practice but had taken no action.

A risk assessment in 2013 highlighted that employees were working inside the light guards.

"There is a risk of a person's hand being crushed by the upper and lower clamping beams and flanged folding beams," it said, and recommended that machine operatives immediately stop working within the light beam.

However, the company failed to implement the risk assessment and the practice continued. Cameron said an assessment in 2014 "removed any reference to the practice of operatives working inside the light guard or the risk that arose as a result".

She added: "The section that had been labelled 'moving parts', in which the 2013 risk assessment had identified working within the light guard, contained only the phrase 'maintain and monitor controls'."

SIG Trading pleaded guilty to breaching s 2(1) of the Health and Safety at Work Act and was ordered to pay costs of almost £23,600 (see bit.ly for more information).

After the accident the company revised its risk assessment, conducted a full review of machinery operations and securely bolted the control foot pedal to the floor. Workers now caught working in the danger zone face dismissal for gross misconduct.

In 2012 a SIG Trading employee was crushed against a wall by a lorry at its Eccles warehouse in Greater Manchester, resulting in a £12,000 fine. In the previous year it had to pay £36,000 after a worker sustained serious injuries when a forklift truck twice ran him over at its warehouse in Livingston, Scotland.

In 2010 SIG Manufacturing was fined £25,000 after an employee lost parts of three fingers in an unguarded machine press.