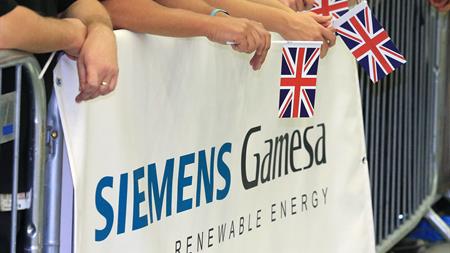 The renewable energy company, which fabricates wind turbines and builds wind farms, pleaded guilty to breaching s 3(1) of the Health and Safety at Work Act. It was fined £66,000 and ordered to pay more than £10,100 in costs.

The Health and Safety Executive (HSE) found Siemens Gamesa had failed to carry out a sufficient risk assessment and to introduce adequate control measures.

The accident happened on 23 April 2017, when the 50 kg coil fell on the worker's arm, fracturing his wrist, Peterborough Magistrates' Court was told.

HSE inspector Steve Lewis said the incident could have been prevented if Siemens Gamesa "had put in place simple measures to reduce the risk of injury from dropped objects".

More than 700 jobs were created during construction of the 353MW Galloper Offshore Wind Farm, which began operating earlier this year. It is located 27 km off the Suffolk Coast and comprises 56 wind turbines.

According to documents filed at Companies House the firm reported a turnover of £1.37bn for the year ended 30 September 2017.