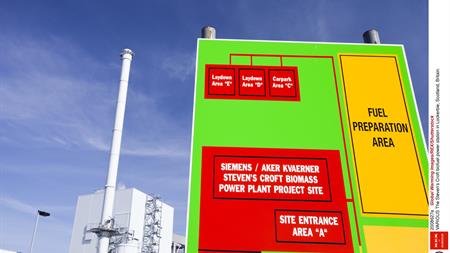 Siemens had been contracted to service the turbine for E.ON between February and March 2013.

Dumfries Sheriff Court was told that ceiling panels had to be removed from the turbine's soundproof enclosure before workers could access it.

On 11 March 2013, an overhead travelling crane was lifting parts of the turbine when a roof panel fell from the top of the enclosure. It hit a Siemens employee on the head and he sustained serious neck and back injuries.

An investigation by the Health and Safety Executive (HSE) found the lifting operation underway when the accident happened was not properly planned, supervised or carried out safely.

It said workers had no safe way of accessing the enclosure and they had not been given information on its construction.

Siemens Industrial Turbomachinery, a manufacturer of small industrial gas turbines from 5MW to 15MW, pleaded guilty to breaching reg 8 of the Lifting Operation and Lifting Equipment Regulations and was fined £12,000.

English energy company E.ON UK was fined £10,000 after it admitted breaching s 3(1) of the Health and Safety at Work Act.

HSE principal inspector Hazel Dobb said: "The contractor's injuries were severe and he could have easily been killed."