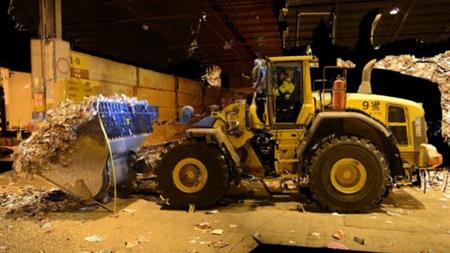 Mold Magistrates' Court was told that Austin Thomas, 29, was working for logistics firm C M Downton (Haulage Contractors), which provides warehouse services to UPM-Kymmene's Shotton mill, when he was struck by a Volvo shovel loader on 6 February 2017.
The driver of the vehicle was another contract worker who was transporting waste paper from the floor to the recycling line in the warehouse, Materials Recycling World reported. Thomas was declared dead at the scene.
The Health and Safety Executive (HSE) found there was no system of work to segregate pedestrians and vehicles.
C M Downton pleaded guilty to breaching ss 2(1) and 3(1) of the Health and Safety at Work Act. It was fined £350,000 and ordered to pay costs of £6,614.
UPM-Kymmene was also fined £350,000 and ordered to pay £6,712 costs after it admitted breaching s 3(1) of the same act.
According to BBC News, District Judge Gwyn Jones said it was unclear why the driver did not see Thomas before he ran him over. Closed-circuit television footage showed there was enough room to manoeuvre around him, and that he was visible for a 30-second period.
HSE inspector Mhairi Duffy said: "This death would have been prevented had an effective system of managing workplace transport been in place."
Topics
Safe systems of work
Workplace transport
Manufacturing and engineering
News