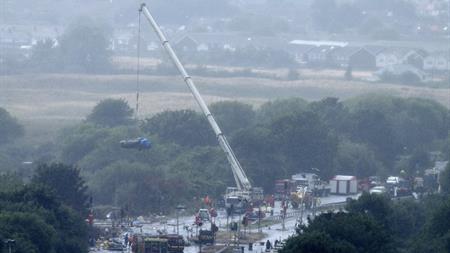 Andrew Hill will be charged with the manslaughter by gross negligence of 11 people who were killed when the Hawker Hunter jet he was flying smashed into a section of the busy A27 road after a loop-the-loop stunt went wrong on 22 August 2015.

Hill, 53, will also be charged with endangering an aircraft under Art 137 of the Air Navigation Order 2009, which states "a person must not recklessly or negligently act in a manner likely to endanger an aircraft, or any person in an aircraft".

Thirteen people were also injured in the incident, including Hill who was thrown clear of the jet but was taken to hospital with serious injuries and placed in an induced coma.

Simon Ringrose, of the CPS special crime division, announced the news to the victims' families at a private meeting in Lewes, East Sussex, yesterday evening (21 March).

In a statement Ringrose said: "Sussex Police conducted a thorough and detailed investigation into the incident and in November 2017 submitted a full file of evidence to the CPS in relation to the actions of the pilot, Andrew Hill.

"Following a careful review of the evidence I have found there is sufficient evidence to charge Andrew Hill with the manslaughter by gross negligence manslaughter of the 11 men who died. I have also authorised a further charge against Mr Hill of endangering an aircraft, contrary to Art 137 of the Air Navigation Order 2009."

The final report by the Air Accidents Investigation Branch found the pilot was flying too low when he pitched up into the loop, and with less than maximum thrust.

The report said: "Although it was possible to abort the manoeuvre safely at this point, it appeared the pilot did not recognise that the aircraft was too low to complete the downward half of the manoeuvre.

Hill will be formally charged with the offences and will appear before Westminster Magistrates' Court on 19 April.

A pre-inquest review hearing is due to take place on 26 March.