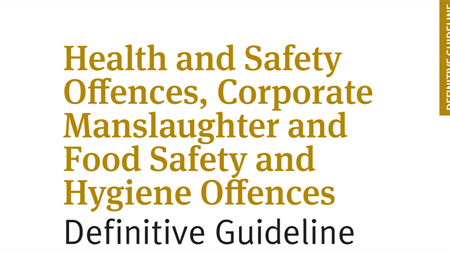 The Sentencing Council's Health and Safety Offences, Corporate Manslaughter and Food Safety & Hygiene Offences Definitive Guideline came into force on 1 February 2016. Its report on the findings from an assessment of the guideline's impact and implementation was published yesterday (4 April).

It revealed that in the ten months before the guideline was introduced, convicted companies were fined £40,500 on average for safety and health offences. According to an analysis of data from the Ministry of Justice's Court Proceedings Database, around two-thirds were fined less than £20,000 and only 17% were ordered to pay more than £60,000. 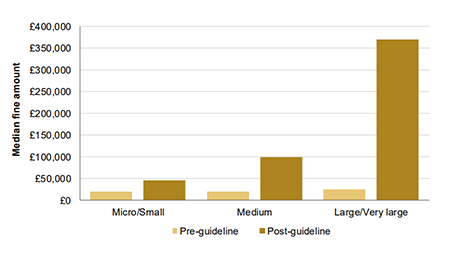 Although the new guideline saw fine amounts increase for organisations of all sizes, prosecutions data from the Health and Safety Executive (HSE) showed the rise in fines handed to "large" and "very large" organisations with a turnover of £50m and over was much more apparent (see figure).

The Sentencing Council said it had not anticipated the increase in fines, albeit to a lesser degree, for smaller organisations and individuals. However, it noted that its analysis of crown court judges' sentencing remarks for a sample of health and safety cases involving both organisations and individuals suggests that the guideline is "generally being applied in the manner intended".

Between 2011 and 2015, more than half of organisations were sentenced in magistrates' courts. This trend reversed in 2016, with 55% being sentenced in the crown court in 2017.

The report said: "Prior to the guideline's implementation, some concerns had been expressed that the harm model might be too subjective, and there was a risk that cases would be categorised as 'level A' [death or significant physical or mental impairment] when in fact the risk of harm was lower.

"An examination of those cases in the sample assessed by the sentencer as 'level A' risk of harm found that all of the assessments of harm in these were valid; in other words, there were no cases incorrectly categorised as 'level A'. In addition, in all cases where information was provided regarding culpability and harm, the starting point mentioned by the judge was always in the appropriate category range, indicating that the guideline is being followed as intended."

It is likely the level of fines imposed on organisations sentenced for corporate manslaughter also have increased since the guideline came into force, however this finding should be treated with caution, the Sentencing Council said, due to low volumes.

Additionally, fewer appeals have been successful since the guideline's introduction. A sample of seven post-guideline judgements heard by the Court of Appeal were all appeals against sentence. Previously, appellants generally submitted that their sentence was manifestly excessive for various reasons, the study found.

The Sentencing Council said: "[We have] considered this analysis, particularly the findings in relation to the fines imposed on smaller organisations and individuals [and intend] to investigate further the operation of the guideline in due course and will consider at that stage whether any revision of the guideline is necessary."

Sentencing Council chairman Lord Justice Holroyde said: "The law requires that any fine imposed must reflect the seriousness of the offence and take into account the financial circumstances of the offender. The council is confident the guideline is achieving this objective and ensuring that where an offence results in the loss of life or very serious injury, fines are sufficiently punitive."