Second UK crane collapse in as many months 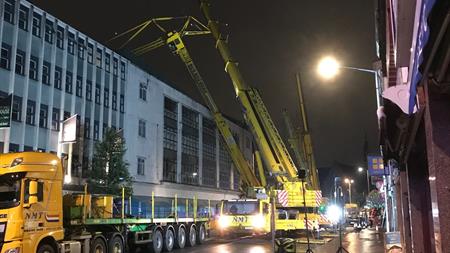 No one was injured when the 35 m tall crane with 60 m horizontal jib toppled onto a building on West Street just before 2pm on Saturday 29 July.

Work continued last night (30 July) to dismantle the jib after another crane was used to stabilise it. Engineers from the Netherlands have been called in to assess the damage and head the recovery operation.

Thames Valley Police superintendent Robert France said "it may take a number of days to repair the jib and remove the crane from the scene".

The Royal Berkshire Fire and Rescue Service's (RBFRS) incident commander, Richie Hamilton, said: "Crews worked throughout the day so that we had extensive plans in case the situation got worse. It was particularly useful to have our heavy rescue unit on hand because we relied on their expertise to inform us about the potential extent of the damage and how we could begin rescue efforts if needed.

"We had a number of hazards to think about so police had to put road closures and cordons in place so we worked incredibly closely with them, and with the local authority to look after residents who were evacuated. Our main concern was that the crane would fall backwards again and swing the other way because it was in a very precarious position."

Many of the 62 residents that were evacuated from their homes have now returned.

As previously reported in IOSH Magazine, two tower crane erectors from Falcon Tower Crane Services died and another worker was injured on 21 June when a crane collapsed at a building site in Crewe, Cheshire. Post-mortem examinations concluded that both men had died from crush injuries.