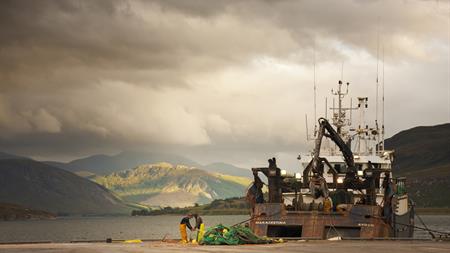 Scotland's fishing minister Fergus Ewing unveiled the plans during a speech at the Skipper Expo in Aberdeen on 17 May.
He said: "It's no exaggeration to say that commercial sea fishing is one of the world's most dangerous jobs.
"Over the years, there have been too many serious accidents and sadly too many lives lost at sea. Injuries and fatalities take a terrible toll. I want to try and change that.
"We need to do all we can to make fishing as safe as possible. I am therefore establishing an expert group to be made up of people who are active fishers in different sectors. It will advise on how we can improve health, safety and wellbeing on Scottish vessels.
"I also hope the work of the group will encourage more people to see fishing as a desirable career, which will help to ensure the sustainability of the industry in the long term."
More details on the group's members, who will represent the likes of the Scottish Fisherman's Federation (SFF) and Marine Scotland, will be released shortly.
It is now compulsory for all commercial fisherman to wear a lifejacket or use a safety harness at sea.
A notice issued by the Maritime Coastguard Agency (MCA) at the end of last year said: "The MCA requires that, unless measures are in place which eliminate the risk of fishermen falling overboard, all fishermen must be provided with and must wear PFDs [personal floatation devices] or safety harnesses. The measures preventing man overboard must be documented in a written risk assessment."
Statistics show that there is a significant risk of fishermen working on open decks falling overboard.
The agency noted that, despite a safety campaign by the Fishing Industry Safety Group and the distribution of about 8,000 free PFDs, "there is evidence that on many vessels the risk of man overboard has not been eliminated and harnesses and PFDs are still not being worn".
The notice refers to the Marine Accident Investigation Branch's database of marine accidents, which recorded 153 fatal drowning accidents from UK registered fishing vessels between 2000 and 2017. Of these, 104 were not wearing PFDs.
SFF chief executive Bertie Armstrong told Press & Journal at last week's expo that the creation of a new safety group, coupled with the rules mandating the wearing of life jackets, would help to bring about a "culture change where safety is at the forefront of everyone's minds".
Topics:
Personal protective equipment
Safe systems of work
Agriculture and forestry
News