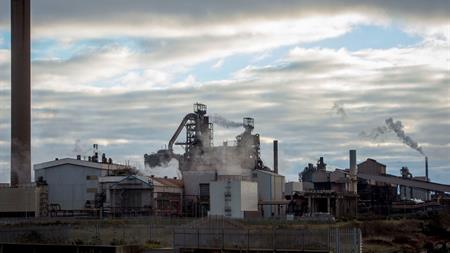 Stephen Kift sustained multiple life-changing injuries at Tata Steel's plant in South Wales in 2014 and he continues to suffer from poor health.
Kift's employer, Rowecord Total Access, has been fined £9,600 over the incident and ordered to pay £32,544 in costs.
Swansea Crown Court was told that Kift was part of a team disassembling a 21 m-high scaffolding structure on 18 January 2014, following maintenance work on an angle tower at the site's Morfa coke ovens.
The workers removed a plate in the scaffolding, so they could clear debris below, and erected a temporary edge protection system around the gap, Wales Online reported.
However, Kift, whose safety line was not attached at the time, fell through the hole. He struck a steel girder -- a support beam used in construction -- before landing on another girder.
He now uses crutches for walking, is in constant pain and cannot sleep for longer than four hours at a time.
Rowecord pleaded guilty to breaching health and safety regulations. Tata Steel was cleared of safety offences.
A previous trial of both companies was prematurely stopped last November after it was revealed one of Kift's colleagues had forged his signature on a register, claiming he had received a safety briefing that he had not attended.
According to BBC News, Judge Peter Heywood said: "It is clear that a briefing took place, but it is clear that Mr Kift was not present and someone falsely signed on his behalf."
Anna Vigars, QC, for the Health and Safety Executive (HSE), said the safety briefing for scaffold workers "should have been more robust" and the fact someone was able to pretend they had been there "speaks to a failure to ensure everything was done as it should have been", Wales Online reported.
An investigation found that Rowecord also had failed to properly plan and supervise the work at height.
Simon Morgan, defending Rowecord, said this had been an isolated incident; the company took safety and health legislation very seriously and had a good track record, he said.
The company lost its contract with Tata Steel following the fall.
Topics
Safe systems of work
Work at height
Construction
News