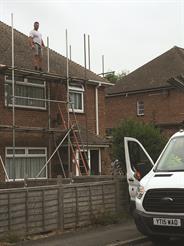 Steven Connolly was erecting a two-lift scaffold on the front of a house in Kent for the installation of solar roof panels.

On 19 August 2016 a HSE inspector drove past the site on her way to work when she observed Connolly working without a safety harness and with no advanced guardrails or scaffolders' safe zone.

When she instructed Connolly to work in accordance with NASC guidance SG4:15, he subjected her to a torrent of abuse.

HSE inspector Andrew Cousins, who led the investigation, told IOSH Magazine: "The language he used was read out verbatim in court and doesn't make for very pleasant reading."

Cousins said the worker then "compounded the situation" by driving away and leaving the scaffolding incomplete.

"This was his way of further disrespecting authority," the inspector said. "And we're talking about the installation of some guardrails which is five to ten minutes' work tops. You might sometimes have an exchange of words with someone for a few minutes because it's a very macho culture but, in the end, they know it's in their best interest to comply."

He added: "We've got photographic evidence that the solar panel fitters had worked on the incomplete scaffold. They could have had a fall; they expect to turn up with the scaffold ready and just get on with their job. Fortunately, no one was injured."

Connolly pleaded guilty to breaching regs 6(3) and 8(a) of the Work at Height Regulations, which cover, respectively, preventing falls from a distance and the need for guardrails or toe boards on scaffolds. He was sentenced at Medway Magistrates' Court to 24 weeks in prison, suspended for 18 months.

Connolly's obstruction of the inspector was considered an aggravating factor by the court and he must wear an electronic tag for six months -- the maximum permitted under a curfew order. He is living at his girlfriend's address in Surrey between 9am and 5pm because he now works night shifts for another scaffolding firm.

Cousins said: "We're disappointed we had to resort to this level of action but we're not going to tolerate this type of abuse of an inspector. People have a responsibility for their own safety and for those who could be affected by their actions."