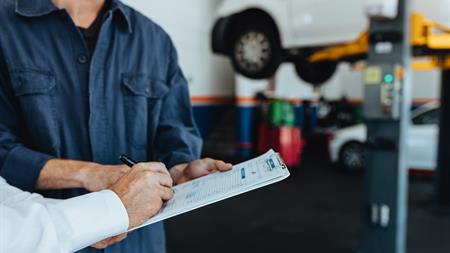 Paul Skidmore was ordered instead to carry out 100 hours of unpaid work following a prosecution brought by Cornwall Council's trading standards team.
The 32-year-old ran an online stationery business alongside his main employment as a health and safety manager for a local clothing company.
Truro Magistrates' Court was told that Skidmore began selling fake car servicing history records in the summer of 2017, in response to requests from customers on the online auction and shopping website eBay.
The trading standards team became aware of his criminal activity the following year after test purchases were made by the Ford Motor Company and Vauxhall/Peugeot Group.
An entry warrant was executed at Skidmore's home address and records were recovered that showed he had sold over 1,500 fake service histories and made more than £9,000 in ten months.
Skidmore, who had no previous convictions, told the court the he was "genuinely sorry" and had been expecting a knock at the door after being warned by eBay that he was selling trademark infringing items.
The court said his offences were so serious that a custodial sentence could well have been imposed.
However, Skidmore was fined £500 and ordered to complete 100 hours of unpaid community service. He must also pay £8,613 prosecution costs.
Cllr Rob Nolan, Cornwall Council's cabinet member for public protection, said: "Ordinarily, Cornwall Council would condemn the sale of counterfeit goods as a threat to genuine businesses and the people they employ.
"However, in this case the fake service histories could only have been used to facilitate car sales, either to increase the price of the car because of an apparent service history, or to mask high mileages travelled or poor servicing and maintenance.
"Such offending puts unsuspecting purchasers at great risk and I welcome this successful prosecution."
Topics:
Regulation/enforcement
Retail
News