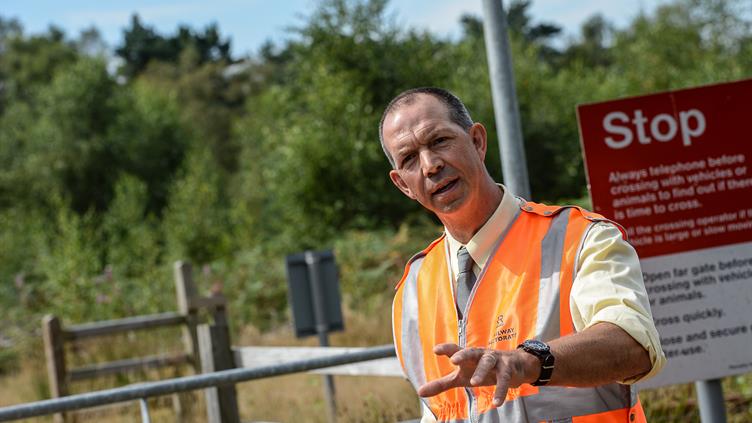 Delegates heard that while on average two people a year are killed in Britain at UWCs, the risk they pose to users is high.

Inspectors from UK rail regulator the Office of Rail and Road (ORR) said more than half of all recorded near-misses between trains and vehicles occur at these crossings.

Adam Meredith, senior engineer and HM Inspector of Railways at the ORR, said the risk of UWCs to workers often goes "below the radar".

He suggested companies ensure employees undertake sufficient pre-planning and risk assessment before starting any work which requires access to UWCs.

Adam, who is also a chartered member of IOSH, said: "To make a one-way crossing with a vehicle or animals, the person will have to cross the track more than once in order to open and close the gates. With each crossing a train is getting closer.

"There is a massive amount of residual risk here to you and the train. If I was crossing this regularly I would ask what are the characteristics of this crossing, and what does the signaler know about it?

"Your safety management system needs to identify who is at risk, check what controls are in place and what can you do to ensure safe use."

Around a third of the 6,000 level-crossings on Britain's rail network are user-worked. They are most often found where farmland is bisected by rail track.

Past collisions between agricultural machinery and trains at these crossings were reviewed as part of the free event, which took place at the Birches Valley Forest Centre, Cannock Chase, Staffordshire, on 24 August.

John Gillespie, HM Assistant Chief Inspector of Railways at the ORR, said delegates could help agricultural businesses realise that "something on their farm that they thought is an asset is actually a liability".

Alan Plom, vice-chair of the IOSH Rural Industries Group, added that many incidents at UWCs had involved workers in industries outside of rail and agriculture.

He said: "One of our challenges is getting other sectors to realise that safety at UWCs is of relevance to them.

"It is not only workers in forestry, farming or rail; it is anyone visiting farms or the countryside in the line of their work. It could be refuse workers collecting waste, engineers inspecting farm machinery or anyone making deliveries to these premises.

"Often UWCs are not in companies' risk assessments, and many wouldn't think to include it."

The event also featured a demonstration of solar-powered gate technology by Gatecare Ltd, and a session on electrical awareness near level-crossings and overhead powerlines with John Haddon from the Energy Networks Association.

John said: "Machinery is getting bigger and high enough to contact overhead cables.

"At this time of year, powerlines become hidden by vegetation and can easily be struck by agricultural vehicles and tipper lorries. My advice is to 'look up and look out'."

Keith Morey, chair of the IOSH Railway Group, said: "Simple and practical guidance is out there. Employers need to understand the extent of the problem and to think 'what can we do about it?'

"At the end of the day, it is to make sure the use of user-worked crossings is covered suitably and sufficiently in risk assessments."

Click here to listen to more from Adam Meredith about safety at user-worked crossings.