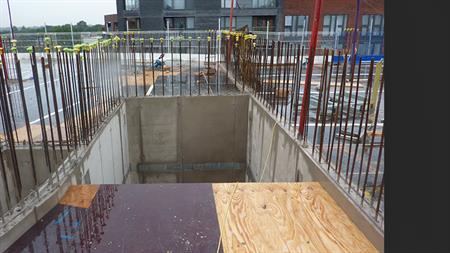 In July 2015 Vasile Nichitut was working on the fifth floor of a block of flats in Ealing, London, when he stepped on to a temporary platform that was covering a vertical shaft. The platform collapsed beneath him and he died from the injuries he sustained in the 14 m fall.
Developer Rydon Construction and groundworks contractor Oliver Connell and Son were redeveloping the Green Man Lane estate, which included demolishing the existing blocks of flats to make way for 770 new homes.
The Health and Safety Executive (HSE) found that Oliver Connell and Son had failed to plan and supervise work at height and ensure it was carried out safely. It said there was no temporary works design for the platform and the company's system for installing and inspecting it was inadequate.
Rydon Construction had failed to plan, manage and monitor the work involving the temporary platform. It had not identified the lack of design drawings, nor had it carried out suitable checks on the platform, the HSE said.
Oliver Connell and Son pleaded guilty to breaching reg 4(1) of the Work at Height Regulations. It was fined £360,000 at Southwark Crown Court and ordered to pay costs of £4834.
Rydon Construction was fined £500,000 and ordered to pay costs of £40,740 after it admitted breaching reg 13(1) of the Construction (Design and Management) Regulations 2015.
After the hearing, HSE inspector Owen Rowley said: "The consequences of temporary works failing can be dire. All contractors involved must ensure that an effective system for managing the temporary works on site is established and adhered to. Crucially, all temporary works require a design to ensure that they are suitable for purpose.
"In this case the failure to manage the risks associated with temporary works and work at height led to the entirely preventable death of Mr Nichitut."
Topics:
Work at height
Construction
News