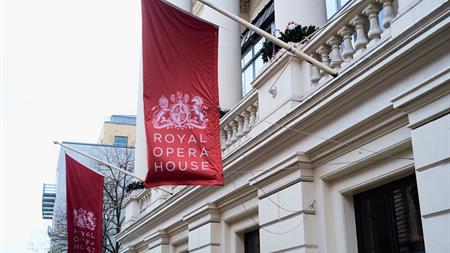 Violist Christopher Goldscheider sustained a life-changing hearing injury caused during a rehearsal at the ROH in London's Covent Garden in 2012.
Goldscheider, 45, had blamed his hearing damage on "acoustic shock", which he said had been caused by brass instruments positioned directly behind him in the orchestra pit. During the three-hour rehearsal of Die WalkÃ¼re (The Valkyrie) on 1 September 2012, the noise levels exceeded 130 decibels, roughly the equivalent of a jet engine.
The violist was forced to give up his musical career after developing the condition, the symptoms of which include tinnitus, hyperacusis and dizziness, and last year claimed damages for future loss of earnings amounting to £750,000.
In its appeal, the ROH claimed there is no good evidence that acoustic shock exists. It acknowledged that, although it would have been physically possible to perform the piece at a lower level of sound, that would have "unreasonably compromised the artistic output of the orchestra".
In the original case, Justice Nicola Davies said that the ROH's breach of duty had caused the musician's condition.
She found that, under reg 7(3) of the Control of Noise at Work Regulations, the ROH should have designated the orchestra pit a "hearing protection zone" and ensured that personal hearing protection was always worn where noise levels were likely to exceed 85 decibels.
"The regulations recognise no distinction as between a factory and an opera house," she said.
However the appellants, the ROH, the Association of British Orchestras, UK Theatre Association and the Society of London, argued it was not reasonably practicable for members of the orchestra to wear hearing protection throughout performances or rehearsals, "since doing so during quieter passages of music would mean they could not hear sufficiently clearly".
The Court of Appeal accepted their case and has overturned that part of the High Court's decision. This will not affect damages set for Goldscheider.
Lord Justice McCombe said: "I add a few words only because of the intervention of the Association of British Orchestras, the Society of London Theatre and UK Theatre Association in which they express concern about the 'likely wider ramifications' of the decision of Nicola Davies J. They speak of curtailing not only the repertoire of the ROH, but 'all music making in the UK -- concerts, theatres, schools, the lot'.
"I simply do not accept that this cataclysmic scenario represents a proper understanding of the consequences of this decision [-¦] The national and international reputation of the ROH is not and should not be affected by this judgment."
Nigel Lock, occupational disease partner at BLM and acting for Royal Opera House, said: "No doubt the live music and entertainment industry will be heaving a sigh of relief that the blanket enforcement of protection for musicians at all times has been overturned. However, the judgment fails to address a number of key issues around the causation of injury at an attenuated noise level at which it is not foreseen that harm can be caused and significant misconceptions in the evidence remain which is disappointing. It leaves many unanswered questions and uncertainties from a judgment we had hoped would bring more clarity to this contentious area."
Topics
Noise
Catering and leisure
News