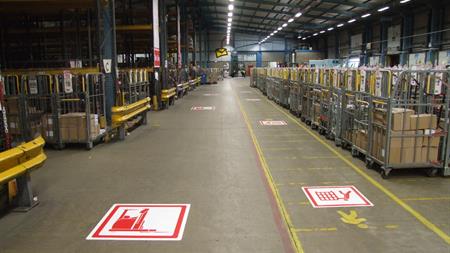 As we reported last month, reach trucks operated in close proximity to workers who were on foot sorting commercial leaflets at the bundling tables. Here, leaflets were weighed, packed together and put into cages which had to be rolled into storage lanes ready for collection by delivery vehicles.

The pallet racking area was located on the other side of the warehouse. Reach trucks operated in this space, either taking pallets out of the racking system or putting pallets back. The storage lanes and racking space were divided by a central aisle.

On 7 March 2014, a worker rolled one of the cages into its designated lane. The warehouse was particularly busy and many of the lanes were filled to the end with cages. This restricted the worker's view and as he stepped back into the central aisle, walked into the path of a reach truck. His foot was run over and he sustained broken bones.

"Royal Mail didn't have a system in place to separate pedestrians from vehicle traffic," said Health and Safety Executive (HSE) inspector Bose Gabriel. "They had carried out a risk assessment but it was not suitable or sufficient and it did not determine how effective segregation could have been achieved."

She continued: "What they should have done, and what they did do eventually, was install a solid barrier in the middle of aisle so reach trucks would be operating on one side and people working on foot on the other side. For a company of that stature it's something that you would expect them to have picked up on and put in place."

The solid barrier does not continue to the very end of the warehouse, leaving a small gap for the cages to be rolled through.

When applying the sentencing guidelines for health and safety offences, Judge Carey determined that the company's culpability was medium, harm category 4 (seriousness of harm risked: level C; medium likelihood). The company was a large organisation, putting the starting point for the fine at £50,000 with a category range between £50,000 and £350,000. It was fined £50,000 plus costs of £10,406.

The HSE's investigation revealed that the employee was not wearing steel tow cap boots at the time of the accident because personal protective equipment (PPE) standards were not properly monitored by the warehouse's managers. The executive found that workers were allowed to order their own PPE from a central ordering system, which listed two different pairs of safety boots but did not specify which pair had steel toe caps.

Following the accident Royal Mail changed its PPE procurement process at the warehouse and today the ordering is carried out by the managers to ensure all employees have the appropriate footwear.