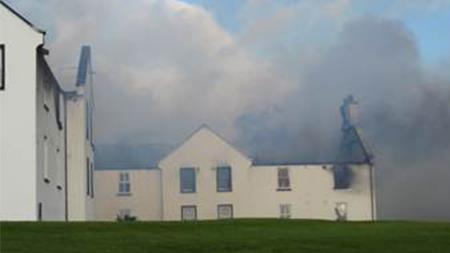 Roy Cross, the owner of Roofcraft, was repairing the roof of Mount Murray Hotel and Country Club's accommodation block, which included replacing lead sheets with fibreglass in the roof valleys.

Cross and two of his employees had stripped some of the lead and were laying flammable fibreglass resin onto plywood sheets in the valley on 6 November 2013 when it started to rain. Work was halted for the day and the area was covered to keep it dry.

The next day the contractors found that rainwater had got in and spoiled the fibreglass. (Newly-laid fibreglass does not cure satisfactorily if it becomes wet). The workers began to clear the spoiled materials so the plywood underneath could be dried off and the fibreglass replaced.

In an attempt to dry the plywood faster, Cross used a gas-fired blowtorch that he had borrowed from the hotel. However, the plywood quickly caught fire. According to a witness, the blaze soon spread to other flammable roofing materials, including bituminous felt and timber battens, helped by strong winds of 20 to 30 mph.

Cross phoned the fire service before he was brought down from the roof in a telehandler that the club's staff had fetched from the golf course. He sustained only minor burns to his hands.

The accident was investigated by the Isle of Man Government's Health and Safety at Work Inspectorate, which found that Cross had not fully understood the risks of using flammable substances and had failed to implement a safe system of work.

He did not liaise with hotel management; the inspectorate found that the hotel's duty manager was not even aware that Roofcraft was working on the roof, and that Cross was using a gas-fired blowtorch above where hotel guests were sleeping.

The inspectorate's investigation also revealed that resins, similar to the ones that had been applied to the plywood sheets, would have continued to give off flammable vapours until the fibreglass had cured.

The expert witness concluded in his report: "Given the volatility of the fibreglass products which have a lower explosive limit of only 1.1% and a flash point of 31 degrees, I consider that the action of attempting to dry the wet plywood with a high heat output LPG [liquefied petroleum gas] blowtorch liberated sufficient flammable vapour which ignited."

Cross, on behalf of Roofcraft, entered not guilty pleas to breaching ss 2(1) and 3(1) of the Health and Safety at Work Act and reg 10(1)(c) of the Management and Health and Safety at Work Regulations, for failing to inform hotel staff that he was working on the roof and what work he was undertaking. However, he was found guilty of all three charges at the Isle of Man Court of Justice, High Court.

At sentencing, he was ordered to pay £2,400 towards costs and to complete 240 hours of community service.

Deemster (a judge in the Isle of Man) Main Thompson said while passing sentence: "You have come within a whisker of losing your liberty. You have asked for a merciful sentence and you will receive mercy."

Following sentencing, senior health and safety inspector Robert Greaves added: "Fire was a foreseeable risk that should have been part of the risk assessment process for carrying out the work. Instead, the firm's failings meant that a hotel was destroyed and the lives of up to 100 hotel guests and staff were put at risk."