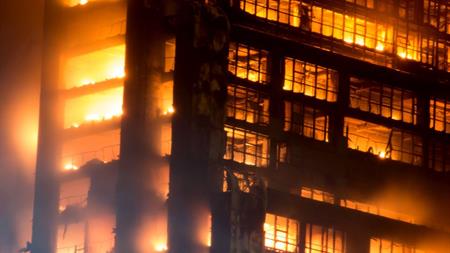 On 16 November 2012, Roxel (UK Rocket Motors) employee Ron Craik was inspecting a faulty rocket charge in a room which had a doorway into a magazine - a store room containing 230 kg of propellant charges.

Roxel employee Alan Jameson and an agency worker, Anthony Jones, were with Craik in the room.

Craik was using a fibreoptic borescope, a flexible tube with a light on one end, to illuminate the inside of a Titus rocket charge. The heat from the borescope's light ignited the charge's propellant.

Worcester Crown Court was told that for about ten seconds, 400°C degree exhaust flame shot 4.5 m from the charge and into the room. The flame at the other end of the charge would have been similar had it not been pointing toward a breeze block wall.The unit remained stationary as the thrust forces at the ends cancelled each other out.

Craik and Jameson ran out of the building, but Jones sought protection in the magazine. After finding it difficult to breathe from the gases emitted by the charge, he also escaped. All three men were unharmed.

Health and Safety Executive inspector David Norman noted that it took Roxel over an hour and-a-half to provide the emergency services with a list of explosives that were inside the building. "Part of the law is that you have to keep a log of all the explosives onsite." Norman said, "Roxel's log was out of date as were the drawings of the buildings."

The firm had not obtained a licence to examine Titus rockets in the building, and that a risk assessment had not been carried out for using the borescope, though it was common practice for such work elsewhere on the site.

In sentencing, Judge Nicolas Cartwright said: "To a layman, the application of a heat source of 229°Cto a rocket propellant would surely ring alarm bells. The fact that such a thing was allowed to happen when steps were taken to prevent it happening elsewhere is what makes this so serious."

Roxel pleaded guilty to breaching Sections 2(1) and 3(1) of the Health and Safety at Work (HSW) Act and Section 12 of the Control of Major Accident Hazards Regulations 2015 (COMAH), which requires dutyholders toput into effect an emergency plan when an uncontrolled event occurs that could lead to a major accident.

For the HSW Act breaches, Judge Carwright assessed Roxel's culpability as high, the harm level as category A, reflecting the risk of death to all three workers in the building.

Roxel was classified as medium-sized company, based on its turnover which fell in the £10m and £50m range, leading to a benchmark figure for the fine of £1.7m or £850,000 for each breach.

For the COMAH offence, the culpability was also high, with a harm category of C, and a starting point of £50,000.

A further reduction of £210,000 was applied to the HSW Act fines to reflect direct costs that Roxel had already incurred, plus a further 20% reduction for other financial considerations.

Judge Cartwright also considered the potential effect of the fine on staff employment, customers and the local area and reduced it by another 25%. He noted: "It would be disastrous for individual employees and for the Kidderminster area if job losses resulted from the imposition of these financial penalties."

Finally, a discount of one third was applied after Roxel submitted an early guilty plea.