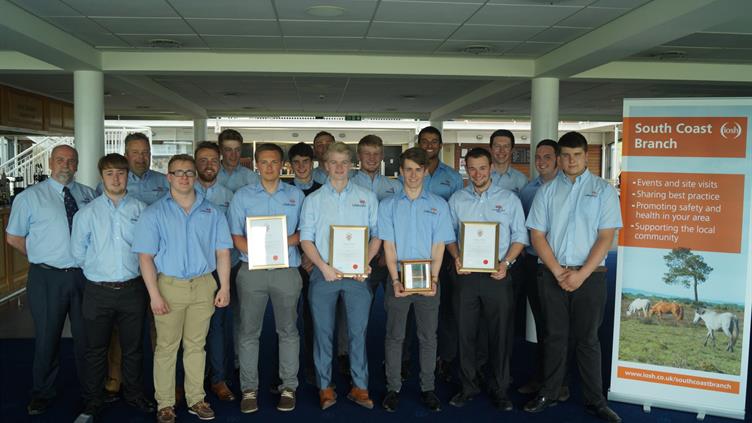 The trainees' efforts to standardise the storage of chemicals at the RNLI All-weather Lifeboat Centre in Poole, Dorset, has led them to be named this year's winner of the IOSH South Coast Branch Apprentices Safety Awards.

They referred to the Control of Substances Hazardous to Health Regulations (COSHH) and their recommendations led to the installation of new cabinets, signage and the creation of new data sheets to improve record-keeping.

The award was one of three won by apprentices at the RNLI, who also received highly commended and merit awards for their work around repair cell staging and near-miss feedback forms.

John McCallion, production operations manager at the RNLI All-weather Lifeboat Centre, said: "I'm delighted that our RNLI apprentices have been so successful in this competition. The awards reflect their efforts over recent weeks.

"In addition to congratulating our apprentices, I'd like to acknowledge the coaching and support of ALC apprentices co-ordinator James Smyth, SHE manager Andy Byers and the SHE team.

"We should reflect on this success as an encouraging sign that we are making progress towards embedding a good safety culture in the RNLI, although we know we still have a long way to go."

It is the second time that the IOSH South Coast Branch has run the awards, which aim to encourage more apprentices to demonstrate an understanding of hazard and risk in the workplace.

IOSH President Dr Karen McDonnell handed out the awards during the branch's AGM on Monday 9 May. The winners received a trophy named in honour of Allan St John Holt, a past president of the institution.

Karen said: "The quality of entries in this year's awards was very high and covered an extremely broad spectrum of topics. What was obvious across all of the entrants was an interest in safety and health, which was great to see.

"I hope that through participating in this the apprentices will all understand the positive benefits of integrating safety and health into daily work and that they might also consider the profession as a future career option."

Entries to the awards were open to apprenticeship organisations and apprentices within the IOSH South Coast area.

They had to demonstrate a basic understanding of hazard and risk, and how they could be managed.

They were judged around four key themes -- content, presentation, relevance and practicality -- by a panel consisting of five current and past members of the IOSH South Coast Branch's executive committee.

Awards coordinator and branch committee member, Charles Cole, said: "I have been in health and safety since 1971 and this year's entries were all wonderful initiatives."