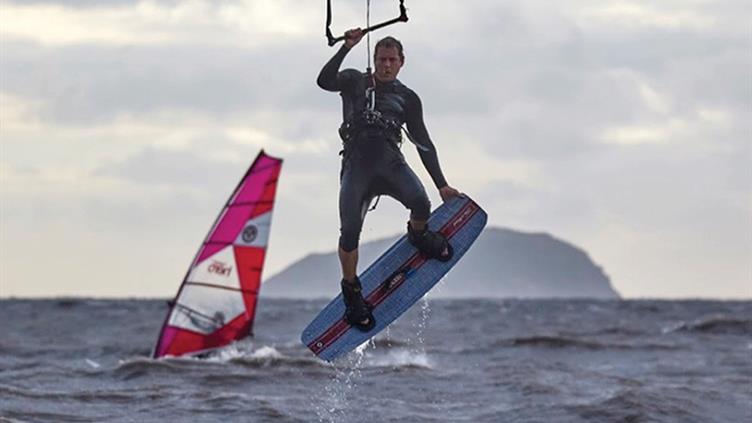 My wife's mother had a place in Tarifa, in Spain, at the time -- around ten years ago -- and the area is a Mecca for kite sports. I went out there and saw kitesurfing on the water and decided to have a go. I had some training and became semi-proficient and found that it's the most addictive thing.

To be able to kitesurf you need several things to align: the tide must be in and you need the right wind. It's not like running or cycling; you can't just go out and do it whatever the conditions.

It's quite a new sport -- it was only invented in 1998 -- and there are some inherent dangers. It can look easy, so it might be tempting to think you can just pick up a kite, but it's actually quite difficult at the start. That said, you get very, very quick progression. 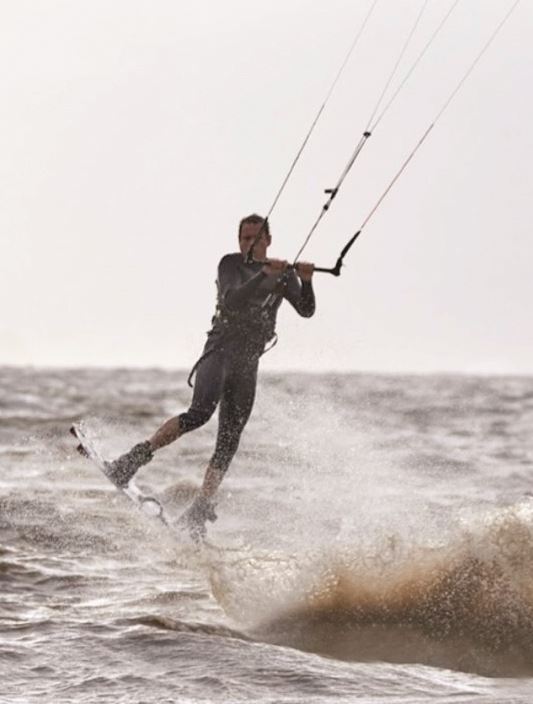 Also, you can't just buy a cheap kite from eBay thinking you can set it up and give it a go. If you buy something cheap and you crash, you will suffer. Taking up kitesurfing is quite an investment in terms of time, money and effort, so you need to make sure you're doing it right.

The first thing is to have lessons because it's not just you that could be endangered; anyone on the beach is at risk of being hit by the kite if you're not properly trained. In summer, when the beaches are busy, councils sometimes restrict where you can kitesurf.

When you start you have to wear a helmet and a life jacket. I don't often wear them anymore, but if I was kitesurfing on the sand I would wear a helmet. Compared with sand, water is relatively soft.

As well as making sure you're properly trained, you need to check your equipment every time you go out. There are "depower" systems to slow you down if something goes wrong. The last resort is to release the kite, for example if it is out of control and dragging you towards something. That's why you only go out when there's an onshore wind and it's not too strong. Then, if something goes wrong, you will be pulled back towards the beach rather than out to sea. There are different sized kites for different wind conditions.

The last resort is to release the kite, for example if it is out of control and dragging you towards something

You have to make sure there are people around you; you don't go out alone. If you were knocked out at sea, you'd need to have someone looking out for you who could offer help. I've helped rescue people and been rescued myself. Everyone's had what we call a "kitemare".

The main rope connecting you to the kite can snap if it deteriorates, so you check it every time you go out. It's a judgment call, as there's nothing to indicate exactly when it needs changing. Five years ago, as I was going out, I thought, "I should replace that soon", and that day it snapped. I was out at sea and my kite was disappearing into the distance. But I knew that I wasn't too far out. That's another rule: don't get yourself into a position you can't get out of; you have to be able to swim back.

There have been some high-profile accidents, including fatalities. Most accidents happen during launch or landing the kite; you need to leave yourself enough space. It's about managing risks sensibly. Conditions are changing constantly -- wind isn't consistent -- so you have to account for that. If there are storm clouds approaching, you go back to the beach and wait for them to pass.

My wife kitesurfs too. When we had our first child six years ago, we were determined not to stop. So now we take the children to the beach with us. We get suited up and one of us goes out while the other "babysits", then we swap over. It means each of us always has someone there to keep an eye on the other.

We often go to Weston-super-Mare -- we live about 30 minutes away. Every free weekend we'll be at a beach somewhere in South West England.

The sport is self-governing: if you see someone doing something dangerous, you go and talk to them. There's a great community, that's one of the best things about it.

I think a lot of businesses can be too risk-averse. Commercially, you need to think about managing risk as sensibly as possible. There's a level of risk you can't get rid of.

Everyone I know who's tried kitesurfing is hooked. I used to ride horses years ago and it's a close equivalent. It's about taming the beast; trying to control it. And if something goes wrong, you revert to your training.