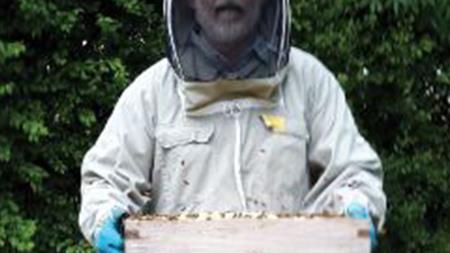 We called the local beekeeper to come and collect them and he suggested that we both visit the beekeeping club. So we did and it went from there.

As a beekeeper your role is to monitor the bees and basically let them get on with it, although, if possible, you try to prevent them swarming. They are a super organism and their numbers will grow and grow. It gets to a point where eventually the colony will split in two, like cell division; one becomes two, two become four.

When the colony splits, the bees will raise a daughter queen who will remain and inherit half the original colony. The old queen, and the remaining colony will take up residence elsewhere. Scout bees will have explored potential sites, like estate agents, to find the best spot, which the old queen and her colony will then move into.

Bees live for only about six weeks; they fly themselves to death. Their wings wear out and fall off but the nature of a bee is to be busy. Even at night, you can hear them buzzing in the hive, a low hum like a generator. But the queen bee can live for several years. She stores the male drones' sperm inside her body cavity and fertilises them one at a time, releasing one sperm per egg. She can give birth to 1,000 babies a day -- it's extraordinary. 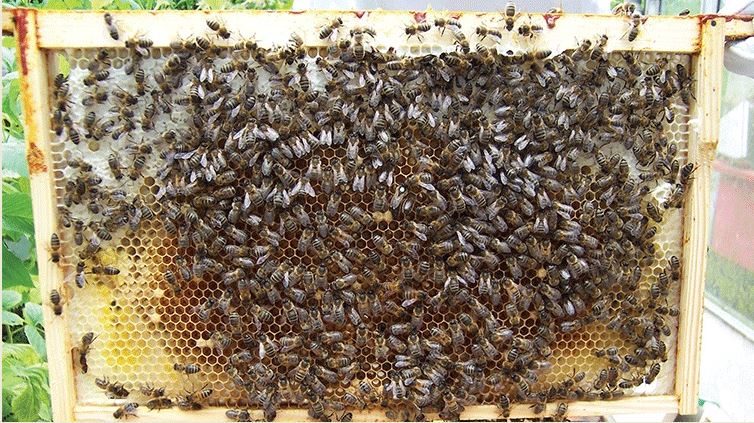 Despite this, honey bee numbers are dwindling in the UK. This is down to a lack of natural habitat and also a mite called the Varroa. It came over from the Far East and lives on the back of wild bees which can swarm and interact with "clean" bees, passing on disease.

Of course we wear personal protective equipment. My bee suit consists of overalls with a veil and a hood sewn in. It seals tight so the bees won't find their way in -- but sometimes they do. We also have gloves, which are rather thick and bulky making it tricky to carry out some of the more delicate work. They are similar to gloves used in my workplace. Some of these are bulky, with thick, padded areas that can affect the dexterity of your finger movements. However, the more protection you have when keeping bees, the less chance there is of being stung. 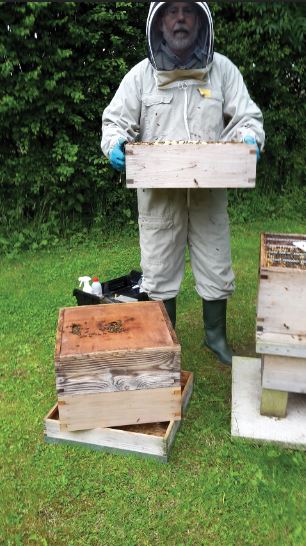 To begin with, we were given a nucleus colony, which is a small number of bees. This built up and up until we had a full colony, which is about 50,000. We have seven colonies that live in the hives in our garden. The hives are wooden boxes that have a modular system inside where the bees make their habitat.

My wife is a bit more risk averse than I am and has been stung infrequently. I am a bit more gung-ho and get stung more often. It's mainly due to the odd jobs that you have to do around the hives, such as strimming grass, that tends to wind them up.

You are constantly risk assessing when you're with the bees, and I've obviously read up as much as I can but you can't control them. One of the riskiest times is when you are collecting a swarm that has gathered on a tree, or, in some cases, in someone's loft.

To do this we use something called a skep -- a portable wicker hive -- which we put on a sheet on the ground below the swarm. If the swarm (usually about the size of a rugby ball) is hanging from a branch, we'll shake it gently and it will just drop into the skep and, as long as the queen is inside the mass of bees, they will all make their way inside. You fold the cloth, tie it round the skep and you're away.

If you want to do something different, go and keep bees. It's an art and a science and every season is different. It's not for everyone, and you will get stung but if you can accept that it can become a wonderful hobby.