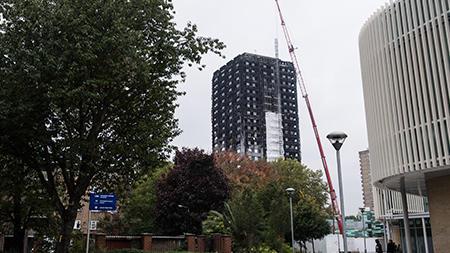 The compulsory test is RIBA's response to Dame Judith Hackitt's Independent Review of Building Regulations and Fire Safety, published in May as a response to the Grenfell Tower fire on 14 June 2017, which resulted in the death of 71 residents.

RIBA has said that architects have come under "increasing pressure" in the wake of the fire to show the construction industry, clients and procuring bodies that they have the right level of safety and health competence and the appropriate skills to ensure the safety of residents.

One of the proposals in the former Health and Safety Executive (HSE) chair's final report was that the Architects Registration Board (ARB), which regulates the architectural profession, should be tasked with scrutinising both the fire-safety competency of architects applying to join the ARB's Register of Architects and those already on it.

According to the Architects' Journal many architects have argued that RIBA is better placed to deliver the "culture shift" in building safety Hackitt's report called for.

RIBA has been working with the HSE and other bodies since 2015 to better position architects as professionals with appropriate safety and health knowledge to undertake the duties of designers, and in many instances the duties of principal designers, under CDM 2015.

The curriculum for RIBA's mandatory test, which will be developed over the new few months, will cover architects' responsibilities as dutyholders under CDM 2015 and other legislation, as well as design risk management and personal safety and health when working away from the office.

Chartered members are expected to already have appropriate safety and health knowledge as set by the architectural education criteria and ongoing requirements of at least two hours formal CPD in safety and health per year. In addition, under RIBA's code of conduct, members can only accept work for which they have the necessary knowledge, skills and resources.

Adrian Dobson, RIBA's executive director of professional services, said: "All UK-based chartered members will be required to undertake the mandatory health and life safety test. Existing members will have at least 12 months to prepare and pass the test. Like a driving licence examination, it will be competency-based and you will be allowed to retake the test, but a chartered member's membership would be suspended until they have demonstrated competency."

However, Geoff Wilkinson from Wilkinson Construction Consultants, and a regulatory contributor to the Architects' Journal said that the test was an admission that existing training had failed to equip architects with the necessary safety and health skills.

He added: "So whilst the aim of improving architects' knowledge and awareness of CDM is laudable, competence really needs to be assessed on a project-by-project basis to match to the actual risks presented by that project."